There are some outstanding performances from the twenty six strong cast. 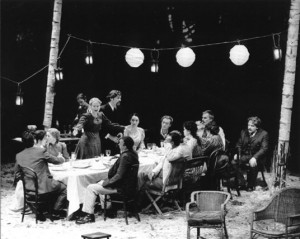 Roger Allam is outstanding as a languid dolt.

It is, again, the ensemble that triumphs, though by now it is clear who have become its real stars: Simon Russell Beale as a henpecked doctor; Patricia Hodge as another doctor, this one falling heartbreakingly into a late-life love even as she discovers feminism; Roger Allam as the smug, wastrel lawyer; (…)

It’s one of those occasions when you want to praise almost the entire cast. Roger Allam is once again outstanding as the lawyer, Bassov, whose sensitive wife (Jennifer Ehle) is appalled by his philistine complacency. It would be easy to present Bassov as a cad but Allam finds baffled humanity and humour in the character too.

Roger Allam, in brilliant comic form as a man in perpetual mourning for a dead wife who actually treated him abominably.