Roger Allam – a transforming and undersung actor – is a perfectly judged Hitler, a man who presents himself as more house-painter than hell-raiser, and who moves from sinister emollience and ingratiating chirpiness to a stooped and cranky figure, one palsied hand clenched trembling behind his back.

Allam’s Hitler is not the table thumping, hectoring leader we have seen on film, but a man who cares deeply about his country. The National Theatre makeup and wig team have ensured a strong physical resemblance. Allam has the posture, the inflection in Hitler’s voice to a T. It is when he mentions “French niggers” in a conversation that we are shocked out of our complacency. 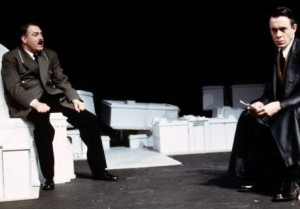 Roger Allam manages to make the character of Adolf Hitler sympathetic in his straightforward but excellent performance with no hint of caricature whatsoever.