Roger Allam returns to the stage this September to play the character of Leonard – a once famous writer turned teacher – in Theresa Rebeck’s Seminar. The play runs from the 25th September to the 1st November at the Hampstead Theatre, a familiar venue for Mr Allam who last performed there in 2009 as Leonardo da Vinci in The Giant. 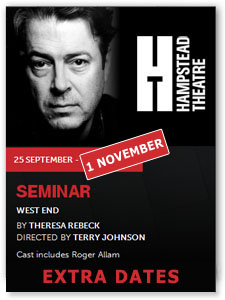 (08 August 2014) First performed on Broadway from 2011, with Alan Rickman originating the role of Leonard, this production marks the play’s British premier. Described by the Hampstead Theatre website as a ‘mordant comedy’ which is ‘a sparkling cocktail of ambition, power and lust – and one with an unexpected kick’, its Broadway run received positive reviews.

The play follows the lives of four aspiring young writers (Kate, Izzy, Martin and Douglas) and their professor in present-day New York. Each of the students has paid a hefty sum to attend Leonard’s classes, but it quickly becomes apparent that he is not quite the first rate mentor they were anticipating…

Seminar will be directed by a Hampstead Theatre old-hand, the critically acclaimed Terry Johnson and further cast and crew details will be announced shortly; check back at the theatre’s website for details or follow them on Twitter (@Hamps_Theatre).

Tickets are on sale now, with prices ranging from £15 – £32 with £18 concession seats available for students, Job Seekers, seniors and those under the age of 26. Tickets at lower prices are also available for previews, Mondays and matinees.