Production for Mr Holmes, the film adaptation of Mitch Cullin’s novel A Slight Trick of the Mind, is officially underway.
(08 August 2014) The kick-off was Sir Ian McKellen tweeting a first picture of himself as an elderly Sherlock Holmes. This was soon followed by the revelation of a stellar cast, with familiar names including Laura Linney, Frances de la Tour, Hattie Morahan, Phil Davis and of course, Roger Allam. Filming will take place over seven weeks on location in London and on the South Coast of England. The movie’s anticipated release date is 2015. 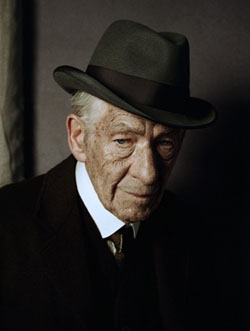 Mr Holmes is a story about the famous consulting detective Sherlock Holmes. The character was created by Arthur Conan Doyle in 1886, but Cullin’s book takes place a lifetime later, in 1947. The now 93-year-old Holmes returns to his seaside farmhouse in Sussex after an unsuccessful search for a rare Japanese plant with powerful restorative qualities. His journey has led him to witness the devastation of the nuclear attack on Japan at the end of Second World War. Holmes plans to spend his remaining days tending to his bees, accompanied by Roger, his housekeeper’s young son. In awe of the aged detective, Roger encourages Holmes to re-examine the unsolved mystery known as “The Case of the Glass Armonicist.” Holmes remembers little of the case – except a beautiful woman – but makes the effort with a growing sense of paternal fondness. Roger’s past reminds him of his Japanese host whose father mysteriously disappeared, but whom Holmes allegedly met years ago in England, though he no longer remembers the meeting. Holmes’ mind is still sharp, but his memory has become untrustworthy, leaving him unsure what is happening now and what has happened in the past.

While A Slight Trick of the Mind sticks to Holmes canon, those who expect a plot filled with fast-paced mysteries for a super sleuth may be disappointed: this is the story of an elderly man, faced with very human problems, suffering (perhaps more than most would) from his failing memory, isolation, and loss of loved ones in the aftermath of the bombings of Hiroshima and Nagasaki.

The movie is directed by Bill Condon, reuniting with Sir Ian McKellen for the first time since their Oscar Award winning Gods and Monsters (1998). But there are more welcome reunions to look forward to: Sir Ian McKellen and Roger Allam were both members of the Royal Shakespeare Company during the 80s. Though never cast in the same play, they finally shared stage in 2004-2005 at the Old Vic, in the pantomime Aladdin. The show was a success with the cast as well as the audience. Allam and McKellen reprised their roles as lovers in Aladdin the following year, and when asked which actor was the most fun to work with, Allam replied: “Ian McKellen. We were in Aladdin a few years ago. He was Widow Twankey and I was the villain, and he ran a very good dressing room. There was a party every night after the show.” (Evening Standard Theatre Awards 2013). The two are still occasionally spotted together at premieres and press nights. Sir Ian even celebrated his 70th birthday at the Playhouse Theatre with the cast of La Cage Aux Folles in 2009, during Roger Allam’s run in the show.

Phil Davies and Roger Allam shared scenes in the 2008 TV movie The Curse of Steptoe, while Frances de la Tour and Roger Allam are no strangers, either – the two worked together in the successful 2007 revival of Boeing Boeing! where she played the wearied maid, cook, pimp and “traffic controller” to his womanizing Bernard.