As the critics begin (with a startling lack of irony) to write about writing about writing, a common theme occurs: the play is a sitcom, the characters written according to type. This assessment, though fairly collective, really couldn’t be more wrong. In Seminar Theresa Rebeck has created a play that is, in essence, a theatre-journalist-sized bear trap in which tropes are disassembled as deftly as they were established, leaving those who were on the hunt for them blustering reductively in their wake. 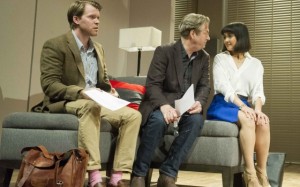 The clues are there from the start as Oliver Hemborough’s ‘well-connected rich kid’ Douglas opens with a pretentious monologue about perfectly balanced “interiority and exteriority”; the audience titters, as well we might, but in a sense this balance comes to exemplify the play. Douglas- despite his ‘exterior’ connections and his previous publications- has decided, thanks to an ‘interior’ desire to actually make something of and for himself, embark on series of writing seminars along with three other bright young things: Izzy (Rebecca Grant), Martin (a foil to Douglas, played by Bryan Dick) and Kate (Charity Wakefield).

Rebecca Grant plainly has a ball in introducing Izzy as ‘the slut,’ determined to prove that sex does indeed sell. Yet for all her apparent desire to sleep her way to the top, she seems to spend an awful lot of time cavorting with the least-connected, most-penniless writer of them all, Martin, while remaining relatively disinterested in his counterpart. Martin himself, for all his apparent ‘nerdish-ness,’ is far more confident in demonstrating his sexual prowess than he is in showing the fruits of his intellectual labours. Then we have principled Kate, who tragically comes to realise that sometimes pretending to be something (or someone) you are not is the only route to success.

And then there’s their teacher, Leonard. Chauvinistic, morally dubious and seemingly self-obsessed, his teaching methods leave a lot to be desired. For the first half of the play it’s extremely hard to see why anyone would pay an exorbitant figure to subject themselves to his vindictiveness, much less on recommendation from others who presumably do not bear them ill-will. However, as is the case with the students, in Leonard we have a character in whom all is not as it seems and his harsh façade cracks considerably as the play draws to its (perhaps inevitable) conclusion. At the interval I over-heard someone complain of how little sympathy she had for the play’s lead, at the end she was bristling at how much she’d come to care. 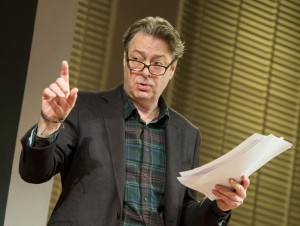 The actor who makes Leonard come to life in a form which made us love him (even if we didn’t want to do it), is the redoubtable Roger Allam. A friend once said to me, as I waxed lyrical about one of his performances, that he could play a tree and I’d think he was the best tree in the forest- her argument doesn’t really hold water, however, as I have no doubt that he really would be the best tree in the forest. His stage presence in Seminar is quite remarkable, allowing audiences to be drawn in even in moments when all is silent save for the rustle of pages. It is common enough for actors to have audiences hanging off their every word, far less so for them to be leaning forward in their seats in response to a nod.

It’s the cast that makes this production so very watchable, and this is a credit to their calibre rather than a criticism of Rebeck’s script which is sharp, subtle and, above all, funny. On paper, however, it would be easy enough for the characters to become tedious, for the intricacies to be overlooked, but this absolutely does not happen here. This is a play that bears, and indeed demands, re-watching, and I’m very glad to have a second (and third) opportunity to re-examine the intricacies of its exteriority (and interiority).