The penultimate episode of the series, ‘Prey’ is a thrilling, nail-biting and heart-rending episode, both in terms of looming physical danger and the revelation of emotional wounds. I had the good fortune to be present at an afternoon of shooting at Rousham House in Oxfordshire (the setting for the fictional Crevecour), which involved several hours of crew set up, rehearsals and repeat performances by the cast. The end result was a mere handful of seconds of footage in the final episode, which only drives home the point that for Endeavour to maintain such high standards in every asp 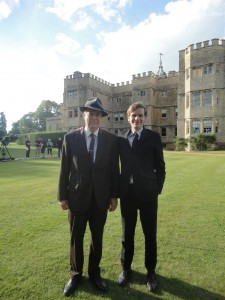 ect of the production, it requires weeks upon weeks of dedicated effort. The results we see on the screen are a testament to the hard work of those in front of and behind the camera and the military-like precision with which they perform.

The episode starts, as always, with threads of puzzles, each interweaving before we get to the meat of the story. In fact, the first proper sighting of our intrepid duo is when Morse comes to pick up Thursday, finding the kitchen a smoking mess as Sam is attempting to make breakfast. Win and Joan have gone to see Win’s aunt who’s “had a turn.” The humour of the moment is spoiled nearly immediately by the sound of Thursday’s vicious coughing upstairs. The cough has become worse, though Sam tries to assure Morse “It’s only in the mornings.” Morse believes that about as much as the audience does.

The actual mystery itself starts with the disappearance of a Danish au pair (Eleanor Williams), who was last seen walking from a night school on Applehurst Road. Thursday is instantly reminded of a similar case from exactly four years ago– another young girl named Sandra Jordan who was attacked in the same location and who is now left in a coma. Her father is dead after turning to drink, but Fred made a promise to her mother, and he intends to keep it.

This information, he passes on to Morse, with instructions to see to any links between the two. All of it falls by the wayside when the terrible cough returns, leaving Thursday short of breath. Morse is concerned, especially when it emerges that Thursday’s not been going to his checkups. Thursday is dismissive, both of Morse’s concerns and the threat to his health and instructs his bagman, “Not a word to Mrs Thursday or Joan.”

The au pair works for a widowed scientist, Dr Hector Lorenz (Milo Twomey), whose work is funded by the wealthy Mortmaigne family, who have an avid interest in exotic animals. Long-time Lewis viewers will appreciate their introduction and meeting Philip Hathaway (Rob Callender), a young groundsman on the land. It’s not the only call-back to Lewis. Feel free to spot them yourselves, with particular attention paid to the Russell Lewis penned episode ‘Dead of Winter’… ed killer. It emerges that the Mortmaigne family was in the practice of keeping large
predators on their property, until a tiger attacked and mauled Georgina Mortmaigne (Stefanie Martini) as a young girl. The case takes an even more sinister turn when Dr Lorenz is found dead as well, mauled in the woods around the estate. As they investigate, Thursday and Morse come across a clearing where the Mortmaigne’s tiger had been kept, in a cage too small for such a large creature. It’s apparent that someone is using the animal for their own purposes, and the hunt is on, leading to a thrilling showdown in the estate’s maze.

The episode would have been intriguing enough with just the most interesting choice of killer in Endeavour history, but the emotional threads that run throughout provide even more satisfaction.  DS Strange has been tapped to fill Jakes’s place, a mantle he wears a bit uneasily– anxious both to be taken seriously in his new role and not to lose Morse as a friend. As a peace offering, he brings Morse a record of “updated classics” and takes him out for a drink. Morse is by turns unimpressed and cutting in his remarks about how exactly Strange got his promotion, and the two men are left to share an awkward pint.

DCS Bright (Anton Lesser) gains some further depth of character, revealing his past in India as a youn g subaltern where he faced down and killed a “maneater,” which had been plaguing the local villages, with the help of a local commissioner named McKendrick, but not before the commissioner was killed by the tiger. When WPC Trewlove (Dakota Blue Richards) suggest that was terribly heroic, he demures. “A hero would have saved McKendrick,” he says, and walks away from the conversation, clearly regretful. The groundsman is unimpressed, dismissive of Bright’s courage and fortitude. Morse and Thursday spring to his defence, but it’s unnecessary as Bright proves himself in the thrilling climax, when Morse is cornered with Julia Mortmaigne (Amy McCallum) and her baby in the centre of the maze by the tiger. As it leaps toward them, Bright saves the day with a steady hand, killing the tiger with one shot.

But perhaps the mo st worrying thread is Thursday dealing with his own caged beast- the lingering fear and uncertainly from the bullet lodged in his chest, too near his heart to remove. It’s obvious that the emotional damage is quite significant, as he is by turns surly and ferocious in his anger. The investigation into Ingrid Hjort’s disappearance leads them to the park manager, who Thursday is convinced attacked Sandra Jordan and is responsible for the disappearance of the au pair, due in no small part to the inconsistencies in his story. Aware he is living on borrowed time, Thursday seeks to tie up loose ends. “There’s never enough time,” he tells Sam during a touching father-son moment, “To say the things you mean to.” is incredibly touching in its pathos. Thursday himself is like the tiger, left too long with his own thoughts and fears, and when he attacks, it’s with a ferocity that belies the calm equanimity we’ve come to expect from him. Shown watching Thursday through the window, like an animal in a cage at a zoo, Morse is bitterly disappointed in his mentor’s breakdown, while Bright feels guilty he hadn’t intervened sooner. The scene between Bright and Thursday, where Thursday gives up his badge and Bright gives up his rules-above-all exterior is as touching as it is concerning. This is the beginning of the end of Fred Thursday, model copper, father, and husband. His inexorable descent into vigilantism is handled with the same superb acting we’ve come to expect from Allam.

All in all, the episode is a superb piece of television, leaving viewers with a sense of foreboding even as we get closer to the Morse that we know and love.