After last week’s tribute to F. Scott Fitzgerald’s The Great Gatsby, one would be forgiven for hoping Arcadia was a literary reference to Evelyn Waugh or Tom Stoppard, but this episode is a cleverly constructed drama that stands on its own, with a nicely tied whodunnit that leaves you guessing till the end. Artist Simon Hallward is found dead in his burnt-out flat. 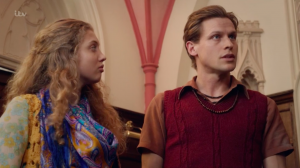 His room is full of solvents and the police are quick to label the fire an accident, while Morse’s attention is drawn by the Teasmaid next to the victim’s bed. Hallward had dropped out of college to join a nearby commune. Suspicious, Morse and Thursday visit ‘House Beautiful’, run by the high-handed Gideon Finn (Max Bennett) and the spiritual Ayesha (Amelia Clarkson). Thursday takes an immediate and intense dislike to their lifestyle and worries what happens behind closed doors. “Free love?” he snipes, “In my experience, that’s the most expensive kind there is.”

An incident with glass in baby food is soon linked with the fatal collapse of a housewife and the ‘tummy bug’ that plagues Cowley Road Police Station, leading Morse to local supermarket, Richardson’s. Outside the store, protesters object against the food chain’s possible involvement in importing prohibited Rhodesian goods. Morse interrogates political activist Cuthbert Mukamba (Charles Babalola) but discovers that the late Hallward is to blame for poisoning the food supplies – a discovery that has Morse sprinting to the nearby pub to stop Thursday from setting his teeth into one of Win’s sandwiches, as she is a loyal customer at Richardson’s. 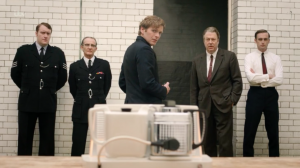 Thursday correctly speculates that the store has been the target of a blackmailer for some time. The intrigue continues to build when it turns out that the grandfather of store manager Ivor Maddox (Chris Larkin) was actually the co-owner of Richardson’s. Initially founded on pacifist Quaker principles, his business partner’s decision to supply the army with provisions during World War I made an end to their collaboration. This discovery allows for a wistful scene in which Morse talks with Maddox’s wife Prudence (Joanna Roth) about his mother and his religious views. 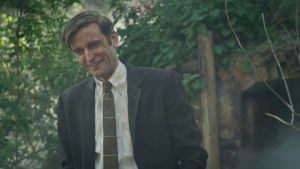 When Verity Richardson (Gala Gordon), the daughter of current owner Leo Richardson (Richard Dillane) and wife, Annette (Genevieve O’Reilly) is kidnapped the very next day, the story changes pace. Morse and Jakes find the terrified girl in an underground passageway next to a homemade bomb. The scene is truly one last moment for Jakes to shine. At first contemptuous and rivalrous, Jakes warmed to Morse over the course of last series, with its apogee the horrible events at Blenheim Vale’s. Just as the two seem to have become friends- he even helps Morse move into the house seen in the later Inspector Morse series- the Detective Sergeant resigns. An unplanned pregnancy prompts Jakes to marry his American girlfriend and move with her to Wyoming. While Morse is visibly shaken by the news, the newly found happiness and tranquility that Jakes radiates is a pleasure to see, and Thursday’s Western-themed farewell speech to him (improvised by Roger Allam) a pleasure to watch.

As a result, a new character is introduced, the observant WPC Shirley Trewlove (Dakota Blue Richards), and the competence she demonstrates makes Morse take an immediate liking to her. And there are more female encounters: the persistent advances of Annette Richardson are ignored, Joan Thursday still harbours a crush, and Monica Hicks- ostensibly the only nurse in Oxford- keeps crossing his path. 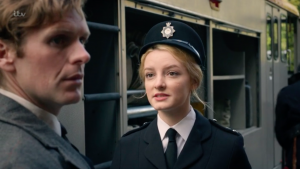 Fans of the Inspector Morse series already know that, while simultaneously uneasy about and longing for home and family, Morse will never have one of his own. However, as Dorothea Frazil remarks, the detective is looking ‘uncared’ for and he was, after all, once engaged…

The past trauma still weighs heavily on Morse’s shoulders, who’s more determined but without spry excitement at finding a clue. Yet it is Thursday’s behaviour that worries far more. A man with high morals, it is no secret that he’s willing to fight for what he believes in, but his control is visibly slipping. In contrast, Bright, who has lost his blind faith in his superiors, becomes more loveable and shows genuine concern for his officers. Russell Lewis’s writing and character development are as top notch as we’ve come to expect of him. The dialogue is lively, especially the few quips from Thursday, played straight-faced by Allam. A great debut from director Bryn Higgins too: Arcadia is visually beautiful, as it shows a more homely Oxford, and the supermarket’s pastel colours and Green Shield Stamps provide their own kind of nostalgia.