The series finale is upon us, and it feels as though the whole cast has raised their game in response. The Thursday women in particular- Caroline O’Neill is quietly devastating as Win, and Sara Vickers communicates with painful clarity the toll that this episode’s events take on Joan. 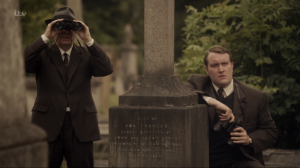 As ever, this week’s Endeavour is filled with references subtle and otherwise to worlds beyond itself- more, certainly, than any one person is likely to spot unaided. Perhaps unavoidably, greatest homage is paid to its parent show- the opening scene of Coda, in which Thursday and his officers watch Harry Rose’s funeral from the bushes, is the mirror of one found in the Inspector Morse episode Promised Land. In that episode, Morse spies on the funeral of Peter Matthews, which could give fans with long memories an advantage when calculating the survival chances of that same Matthews later in the episode…

But the cases are not the true focus of this week’s episode. Fun though Morse’s case-of-the-week might be in places- and it gives us the awkward conversation in which Morse attempts to convincingly pretend that he habitually refers to women as “birds”- this episode was always about Fred Thursday, and the kind of man he would choose to be.

As his health has deteriorated over the series, Fred’s armour of righteousness has begun to show its cracks. Last week, in Prey, he attacked a suspect in a fit of rage, and now Morse watches him rough up an informant in the cold light of day. 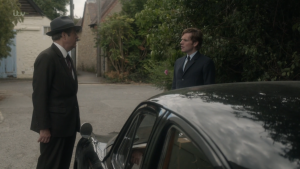 “Is that how we do things now?” Morse asks, only to have his own performance criticised. Thursday wants “a bagman I can stand on” regardless of the ethics of his actions. Morse can’t take that, and it’s probably just as well for their friendship that a fit of coughing interrupts whatever epithet Thursday intended to throw at Morse’s retreating back.

Not long after this, Morse has to watch Strange deliver a similar beating. He protests- and again, it’s Morse’s own loyalty to his colleagues that’s questioned. It hits hard, and Morse sounds almost tearful as he insists; “If you want to take a leaf out of Thursday’s book, there’s better places to start.” It’s a beautifully delivered scene from Shaun Evans, and it speaks to what’s really at stake. There’s a better man in Fred Thursday than the one running loose at present, Morse knows. It’s that man that’s kept him at Cowley Road this long. And this episode poses the uncomfortable question: would a loyal man back his superiors, his friends, unquestioningly and “to the hilt”, or would a loyal friend try to stop them becoming men that their younger selves would be ashamed of?

Then, bringing with it the sense that the rest of this episode was little more than prelude, the crunch comes. We have been shown, in no uncertain terms, the anger that burns in Thursday when young women are threatened- after all, it “could have been my Joan”. This time, it is his Joan. And as, one by one, all the familiar faces descend on the Wessex Bank, we wait, hearts-in-mouths, for the other shoe to drop. 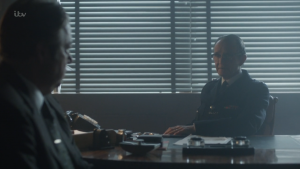 Fred has been fighting tooth and nail this series, aware that time is running out, and desperate to go to his grave knowing that he took some of this world’s evil down with him. Now, with his daughter in mortal peril, he’s told he can’t act. I don’t think anyone believed he would obey. Bright seems to understand this too, and, eyes averted, grants Thursday the right to choose his own path.

En route to the station, Thursday has a short scene with a shaken Constable Trewlove. It’s almost an aside to the flow of the main plot, but heavy with symbolism. It is also a sweet moment of camaraderie between two police officers, one shocked at a demonstration of what man is capable of doing to man, the other well wearied of such things- perhaps to breaking point.

Fred offers her a cigarette, and a piece of advice from his old guv’nor, Sergeant Vimes of Cable Street. There’s an emphasis on “Cable Street” that feels very intentional, and it calls to mind a particularly violent moment in British policing history- 4th October 1936, when the police, ordered to clear the route for a British Union of Fascists march, clashed with huge numbers of anti-fascist protesters. Police and protesters fought in the streets, but it’s the rallying cry of the anti-fascists that Thursday quotes to Trewlove- “No Pasaran”- “They shall not pass.” 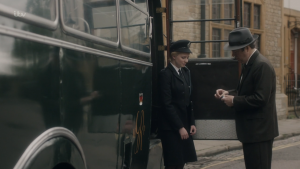 And Vimes? That calls to mind another copper with a pack of smokes behind his notebook, caught between the light and dark of policing in Terry Pratchett’s Ankh-Morpork. That Vimes found the strength to stand against the brutal tactics of his world’s Cable Street and do it by the book. What sort of copper are you, Fred? What sort of man?

When the time to choose comes, it’s a tableau we’ve seen before- the villain at our hero’s mercy, the choice to capture or kill. By now, we expect our heroes to show mercy in this situation- even the gunman at Thursday’s feet expects it at first- and it’s a testament to the acting of all involved that this feels like a truly close call.

Thankfully, Fred decides- with a little help from Morse- that he is a policeman still. The gun is lowered, an arrest made, and all is done by the book. There’s another Pratchett parallel, if you’re the sort to look for it. 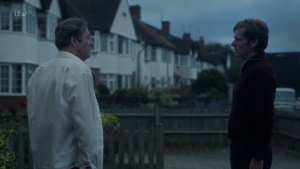 And this episode reminds us that between Morse and the Thursdays lies something more than simple loyalty.
“We’ve got another of yours” the bank-robber tells Thursday, not knowing quite how much truth he speaks. When the Thursdays let go of their son, when their daughter slips through their fingers… Morse is there. Unlooked for either time, and hardly thanked, but there for them. For all the talk this episode of leaving Cowley, for all the apparent easiness of the sergeant’s exam… could Morse really leave this family now? We very much doubt it.

Endeavour returns next year. Filming starts in May.
Learn more about intertextuality in Endeavour here.