When last we ventured out in Oxford with boys from Cowley Road Police Station, their prospects were looking singularly bleak. The villains may have lain defeated but there was little triumph to be had. Not with Thursday fighting for his life, Morse in prison and framed for murder and even the usually acerbic Jakes laid low. Russel Lewis certainly knows how to keep an audience on edge during the long wait between series.

Ride begins with the ominous refrain of the funereal Lacrimosa and a hard, thudding line drawn under the events at Blenheim Vale Home for Boys. The case du jour begins with a serene country home juxtaposed with a bustling fun fair that is joined by a secondary intrigue comes soon after: the case of the disappearing Morse who no one has seen since his release. The episode is in part about appearances and deception where above all else a magician never reveals their secrets, leaving Thursday and Morse to do it for them. It would take the likes of them to conjure the connection between a murdered bus conductress, the death of a student, a fun fair and an enigmatic gambler–the latter of whom (Joss Bixby, superbly played by David Oakes) turns out to be Morse’s neighbour. 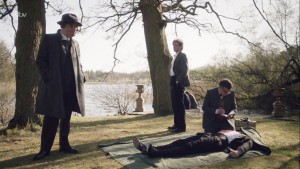 All our favourites return in their usual fine form. Shaun Evans is once again stellar as Morse, this time a man trying to reconcile a shaken world view and a loss of purpose. The events of Neverland leave a dark cloud over all characters that is felt right from the off. The toll is obvious and on none more so than Thursday who bears both physical reminder of the bullet wound and the emotional one with his continued hunt for Morse. It is the murder that finds the man first and his own seemingly inescapable attraction to intrigue, which makes one wonder if policing was really the only profession he could logically fall into. While Thursday is back in his loving home with the indomitable Win to provide support from the sidelines as only she can, Morse is sequestered amidst the idle rich with only his records for company. 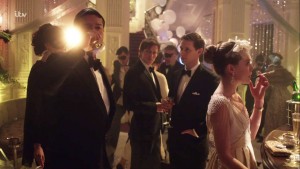 Not all is melodic strings and booming opera, though Morse being Morse there are plenty of both. We are into the ‘60s where rock and roll comes into play. The new decade offers up a whole new era of colourful costumes, make up and the most stunning cars for our viewing pleasure. These are framed stunningly by director Sandra Goldbacher. The vivid colours and smooth angles highlight the burgeoning life of the 1960s that comes through so perfectly, particularly in the loud masquerade party in the stately home.

Ride is also about the past, about hiding from it and facing it–something Morse must do with the encoragement of all at the station who have been awaiting his return. Even Bright has a strangely subdued and heartfelt moment with the detective to welcome him back to the fold. It is no surprise that it would be Thursday’s determined and paternal flair that spurs young Morse to lick his wounds and return to the fray. 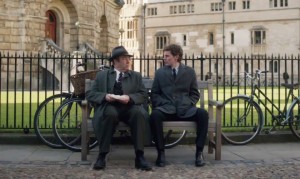 Allam’s performance is as good as we’ve all come to expect, facing his own demons while trying to help Morse banish his is no mean feat and their heart to heart was a joy to watch. By the end all may not be back to the old standard, as Morse notes himself much has changed for all of them – though it sure to warm many a heart that he still knows Thursday’s sandwich schedule.

The mystery wraps its twists and turns in a perhaps less elegant way than some others but with no less emotion. The magicians’ secrets are revealed and the deceptions broken. The confrontation is a brutal reflection of what can happen when a past of hurt is bottled away, much like the explosive ending of the previous series. At least this time Thursday is unhurt and Morse is back where he belongs, back to doing what he does best. So back to work it is, a long road though it may have been for the detectives and the viewers. Back to work and who knows what will unfold next.