No such confusion where Roger Allam is concerned, who takes the part of Lambert Le Roux, a South African newspaper tycoon intent on outgunning Fleet Street by getting a foothold in Britain’s regional press. He dominates whenever he is on stage, along with his sidekick Eaton Sylvester, played by Michael Begley, both with impeccable South African accents. 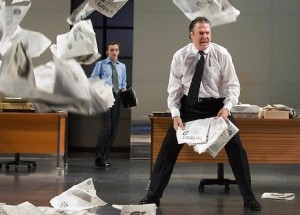 Playing the role, Roger Allam never puts the fear of God in you, as the hypnotically reptilian Anthony Hopkins did in the original production, but he’s a formidable presence and captures well the tantalising shifts in Le Roux between taunting, shameless transparency and the mysterious opacity of the lonely mogul.

Roger Allam’s Lambert lacks the snake-in-the-grass menace of Anthony Hopkins, who chillingly created the role. Yet Allam, with his slow, lumbering walk, hunched body, face inscrutable as an undecyphered code and voice a cocktail of South African vowels, lightly rains down contempt upon his bedraggled victims. He enthralls the audience as much as he does the employees.

Roger Allam plays Lambert Le Roux with a wonderful display of ferocity laced with cynicism and low cunning. (…) It is a performance worthy of a better play and material.