From the arresting opening of Peter Stein’s minutely calibrated production, in which Roger Allam’s shambling Ray drags febrile Una (Jodhi May) into the litter-strewn, shabbily anodyne staff room, the entire production lassoes the audience. What makes the writing so immediately impressive is Harrower’s control of what is not being said. As in the best of Pinter, every silence packs such a dramatic punch that the audience remains shockingly still.

Basically a two-hander, Jodhi May as Una and Roger Allam as Ray, command the stage for what seems a fleeting 2 hours (without an interval) keeping the audience continually on the edge of their seats. Although both actors are equally convincing and turn-in exceptionally fine performances, there was one remarkable scene where Allam seemed to be physically ageing in front of us.

David Harrower’s superb drama about the reunion between a paedophile and the woman he abused as a child was a big success in Edinburgh last summer and now deservedly transfers to the West End. The meeting provides the most potent dramatic cocktail of guilt, memory, violence and desire, and the great German director Peter Stein’s production is blessed with tremendous, no-holds-barred performances from Jodhi May as the damaged young woman and Roger Allam as the man who betrayed but also genuinely loved her. Shattering and unforgettable.

The play is given shattering life and dramatic detail in a production by veteran director Peter Stein, and is performed throughout with the kind of bruising integrity that makes for an evening of undiluted and harrowing power. 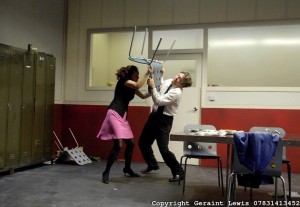 Allam slightly overdoes the slumped, head-in-hands misery, and we are treated to prolonged exposure of his naked bottom that I could have lived without, but the mixture of rage, fear and deep internal pain in this performance is unforgettable.

If the piece shocks and disturbs, it is partly because of the visceral force of Peter Stein’s masterly production. Jodhi May is perhaps a little too patently the sexual aggressor but brilliantly re-enacts the nightmare moment of her desertion. Roger Allam is extraordinary in suggesting the shame, fear and lingering desire of a middle-aged man who has earnestly tried to reinvent himself.