In an evening of (im)pure, adulterous pleasures, Roger Allam and Mark Rylance, playing his friend from the provinces who is unwittingly thrown into the sexual maelstrom, demonstrate a propulsive comic energy that is carried on tidal waves of panic.

The male parts are taken by two fine classical actors — Roger Allam as Bernard, the Parisian philanderer who has studied the airline timetables in order to cox and box three lovely air hostesses, each one of whom believes she is his fiancée. Allam is all suave sophistication which turns to consternation as his deceptions start to unravel.

Jacques Charon, the great Feydeau director, said the secret of farce is to be “natural within the style”; and the triumph of Warchus’s production is he presents us with real people rather than mechanical objects. Roger Allam’s Bernard, bragging that his plan is “so precise as to be almost poetic”, perfectly exudes a peacock vanity which demands retribution. 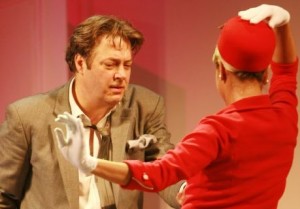 The physical comedy is remarkably well choreographed, with such precise timing I wouldn’t have been in the least surprised to spot a conductor in the pit. Roger Allam’s performance, as Bernard, dives splendidly from such dizzy heights of sexual gratification that he can barely refrain from dancing to comically impotent despair.

If it all sounds like a load of tosh, well it is. But look again at the cast-Allam, Rylance, and de la Tour. Their combined talent make nonsense of the adage “if it ain’t on the page, it ain’t on the stage.”