Three years after its sold-out run at Hampstead Theatre David Hare’s critically acclaimed play The Moderate Soprano is making its West End debut next spring at the Duke of York’s Theatre.

The production is once again directed by Jeremy Herrin, with Roger Allam and Nancy Carroll reprising the roles of Glyndebourne founder John Christie and soprano Audrey Mildmay respectively. Paul Jesson returns as Dr Fritz Busch while Anthony Calf replaces Nick Sampson as Professor Carl Ebert and Jacob Fortune-Lloyd substitutes George Taylor as Rudolf Bing. The script has been reworked and a new character, Jane Smith, will be played by Jade Williams.

The production will feature new set and costume designs by Bob Crowley. 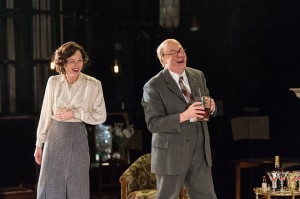 The Moderate Soprano is a comedy about a man’s foolish passion for opera which develops into tragedy of unrecognized sacrifices one makes for the sake of love.

On the announcement, playwright Hare said: “Few people know the extraordinary story of how an eccentric English schoolmaster bumped accidentally into three refugees from Hitler’s Germany, and formed one of the world’s great opera houses in the 1930s in the middle of the English countryside. But even fewer know that Glyndebourne’s true founder was John Christie’s adored wife, Audrey Mildmay, whom he called ‘the moderate soprano.”

3 thoughts on “The Moderate Soprano transfers to the West End”