Endeavour returns with a new six-part series. The first episode airs on Sunday 4 February at 8pm on ITV. 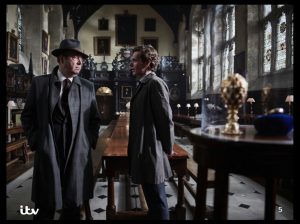 With each film once again written by series creator Russell Lewis, the new series begins with Morse having finally passed his Sergeant’s exams just as Oxford City Police merges into Thames Valley Constabulary creating uncertainty for everyone at Cowley CID. And despite Joan Thursday return to Oxford, much also remains unresolved following her disappearance the previous year and Endeavour’s unexpected proposal.

Russell Lewis says: “Many of the global tensions of that most turbulent year, 1968, have found their way into our six new Endeavour mysteries. 1967’s Summer of Love seems already a distant memory. Dark clouds are gathering at home and abroad as, after almost 100 years, the long history of Oxford City Police comes to an end. A terrible storm is set to blow through the professional and personal lives of newly promoted Detective Sergeant Endeavour Morse and Oxford’s finest, leaving devastation in its wake.”

Is there an element of endings and new horizons in this series? 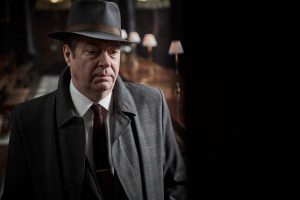 “Yes, I think so. Certainly the police story is about the possible imminent closure of Oxford City Police and the amalgamation into Thames Valley. The threat of the team breaking up. While Morse and Thursday have the same relationship, they are not together as much as they used to be.

Also with Thursday’s daughter Joan returning, relations are not back to normal between her and Thursday because she is establishing her independence, and his son Sam is away in the Army. There’s a feeling that what used to be the case, that the Thursday household was this warm family – that’s now breaking apart as well and changing.”

Is Thursday making plans for his own future?

“Thursday is very resistant to the prospect of being kicked upstairs and doing a desk job when Oxford City Police is amalgamated. That’s not what attracted him about the job. So retirement is imminent and Win is certainly making plans for when that day comes.

There’s an increasing sense in this series – as I think happens with every generation – that there comes a point in your life where suddenly things seem to have moved on and the world has become a different place to the one you understood when you were a young adult. 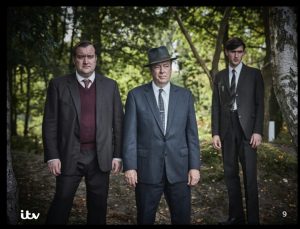 In Fred’s case, the whole thing of getting through the war and building a new life in Britain afterwards now seems to be being questioned and under threat. I guess that would be something he might not quite understand.

What’s represented also with his relationship with his daughter Joan is that things change. They don’t stay the same.

Rather like has happened in my generation with the internet, computers, social media and things like that. Technology has moved so fast now that even if you can stagger around the internet like I do and manage, use emails and whatever, it’s already superseded by loads of other things I don’t particularly understand or see the need for.

Fred would be feeling the same about how life is changing in the 1960s. Oxford City Police is a smaller outfit, more like a village than a big corporation that Thames Valley Police would become. Oxford City Police feels like somewhere, to quote another television programme, where everyone knows your name. Now that appears to be coming to an end.”

Thursday encounters the face of fascism in one of the films. Why does that make him so angry?

“There were a lot of people in Britain in the 1930s – a lot of upper class people – who supported Hitler either tacitly or more openly. They saw communism as the enemy. Then Fred experienced the Second World War and lost some six years of his life fighting that war with millions upon millions of deaths. 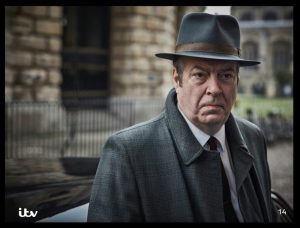 The anger he has in 1968 is that people he regarded as traitors, like one of the characters he encounters in this new series, got away with it.”

Morse and Thursday are involved in a fire. How was that to film?

“I was running around in a building full of smoke. It’s quite technical and gets broken up into various little sequences. We used two different buildings in very different locations. One for the interior and one for the exterior. So the way you get to film it is very broken up.”

We meet Thursday’s middle brother Charlie, played by Phil Daniels. Had you worked with Phil before?

I’ve seen him on and off since then, but it was very nice to see him and work with him again. That’s one of the nice things about this job – you can meet people years later and just pick up where you left off.”

We see Fred and Win on the dance floor this series. How are your ballroom dancing skills? 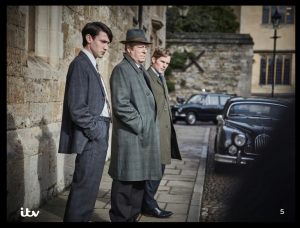 “You only meet them briefly, I’m happy to say. I think otherwise we’d still be rehearsing it. My ballroom dancing skills are completely non-existent. I’ve been choreographed in various musicals before. So I’m not completely two left feet. But I’d never done ballroom dancing before. The writer Russell Lewis seemed very keen on those scenes.”

An Oxford cinema is central to one of the new films. Can you remember the first time you visited a cinema?

“It would have been in the East End of London. Something like Carry On Sergeant. One of the early, more innocent, Carry On films. What I remember – and what you don’t often get now – is an absolutely packed cinema of people laughing. That’s how I remember it.”

Are there parallels between some of the events in 1968 and today?

“There are always historical reminders in Endeavour. Our writer Russell Lewis has been very clever about the way he’s done that as we’ve gone through the sixties. The World Cup, Summer of Love, all that sort of thing.

The new series includes protests over immigration, increasing racial tensions, the influx of the Kenyan Asians. We also have a black criminal gang moving in on white criminal territory.”

Some fans are fascinated by the different contents of the sandwiches Win makesevery day for Thursday to take to work. Did that come as a surprise to the cast?

“It’s lovely that people enjoy that. Thursday’s sandwiches are one of those little continuity things people love. It’s just one of the aspects that marks the series out as somewhat different to Inspector Morse, Lewis or a lot of other police and crime shows.

In that there are a fair amount of regular characters who we get to know independent of the police inquiry taking place in any one film. There are Thursday family stories and Morse’s involvement with them that are not to do with the whodunit element.”