Find out what the critics had to say about Roger Allam’s performance as John Christie in The Moderate Soprano at the Duke of York’s Theatre, London…

One of the high points of Roger Allam’s superb performance as Christie comes when he defends the practical difficulties, as well as the high costs, of getting to Glyndebourne on the grounds of the artistic enrichment offered. To some, the experience is simply “snobs on the lawn”, but when Christie says “we’re talking about the sublime” Allam’s voice vibrates with passion. But Allam also gives us other sides of the contradictory Christie, such as the patrician arrogance that led him to sack Ebert with peremptory abruptness.

Is building an opera house in a garden near Lewes practical?’ Of course it’s not, in theory, but then John Christie (Roger Allam) doesn’t hold much truck with theory. A delightful English maverick in the PG Wodehouse mode, his love of opera and love of his wife Audrey Mildmay (Nancy Carroll), the eponymous soprano, go hand in hand. He enlists three musical refugees from the Nazi regime and Glyndebourne, a curious combination of eccentricity and professionalism, begins to take shape. Allam is, as ever, a master of the dry one-liner and there’s lovely work from Carroll as a skilled peacemaker for her occasionally irascible spouse. 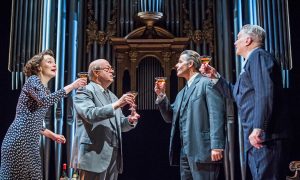 The tight and polished production owes as much to individual performances as to extremely capable directing – with Jeremy Herrin firmly at the helm, allowing the cast of strong characters to weave their way through the playwright’s recitatives and arias. Roger Allam as Christie embodies the quintessentially English, but modulates through the reticence and propriety from comedy to pathos with great effect. All of the above is underpinned by stylish sets that create remarkable depth on the stage and reflect the grandeur of the interwar period without excess.

The Upcoming – The Moderate Soprano at Duke of York’s Theatre, 12 April 2018

Nancy Carroll and a barely recognisable Roger Allam are excellent (…) Christie was a man of many paradoxes. Indeed, this could be called, though Milton might not allow it, Paradox Found. Roger Allam personifies this as a man who was fanatical about small efficiencies but doesn’t mind funding the money pit that is an opera house.

The Times – Hare’s very English story of these Glyndebourne oddballs lives up to its name, 12 April 2018 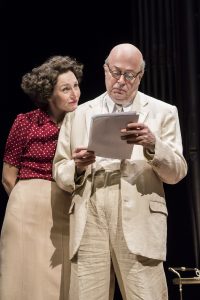 The story of the foundation of opera at Glyndebourne is largely the story of an outrageous (and completely excellent) character – Captain John Christie. Played here (reviving his role from 2015) with vibrating aplomb by Roger Allam, Christie was a man of seemingly limitless funds, a focus on giving back to society, and a love of opera. It seems logical, therefore, that accompanied by his professional opera singer wife Audrey, he should build an opera house in his garden and open productions to the public to try and improve the overall standard of opera in the country. Helped by three extraordinarily talented men (conductor Dr. Fritz Busch, producer Prof. Carl Ebert and manager Rudolf Bing) we watch the first season take shape – a beautiful story of passion and artistic drive.

It is an immensely moving portrayal of a love that does not speak its name, full of insight and empathy. Hare and the director Jeremy Herrin are lucky to have playing Christie and Audrey two actors who are supremely skilled at suggesting suppressed emotion. As Christie, Roger Allam (in a much better wig than before) is a superbly convincing mixture of patronising bluster and deep feeling. You utterly believe that this is a man whose humanity would express itself in reading verses from Spenser’s Faerie Queene to soldiers trapped with him in the trenches of the First World War – and that he would write letters to Winston Churchill telling him how to run things in the Second.

There’s a wonderful scene when he realises that he is going to have to cede the artistic running of his opera house to the professionals – Paul Jesson’s brusque Fritz Busch, the imperious Carl Ebert (Anthony Calf) and the charming Rudolf Bing (Jacob Fortune-Lloyd) who would go on to run the Edinburgh Festival and the New York Met. He sits in his chair, squirming impatiently, and then strikes the arms with the petulant temper of a child when he realises he is beaten. But he gives up with grace; his passion for opera is greater than his concern with status.

There is no faulting the cast either, Roger Allam is perfect as the former Eton school master, with the inherited estate his new personal playground.  He manages to strike the balance between eccentricity and sensibility perfectly. 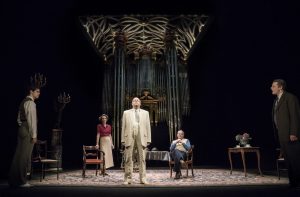 Theatre Weekly – Review: The Moderate Soprano at The Duke of York’s Theatre, 12 April 2018

Roger Allam is on fine form as a plummy, persistent John Christie who has big dreams for his own garden. (…) It’s an rousing story of love – passion for opera and devotion to your partner – and a wonderful opportunity for opera buffs to chortle away at all the in-jokes.

Roger Allam and Nancy Carroll serve David Hare’s iron fist in velvet glove to perfection (…) So truly, deeply and beautifully do Nancy Carroll and Roger Allam nuance every line that it’s hard to tell if the real magic comes from their performances or from what Hare gives them. (…) It’s a long path from the figurative and literal Lederhosen-wearer to the bleak, bereft Christie Allam conveys equally brilliantly towards the end of the play. The man’s faults aren’t avoided – the lord of the manor who wanted democracy, but only at his command; the taking-for-granted of his privilege (when telling his colleagues that a visa is being quickly sorted, Ebert announces “they all went to school together, they look after each other”); the bursts of inspiration that aren’t backed up by hard graft.

Christie (sumptuously played here by Roger Allam) ignored the practicalities of such an endeavour with the kind of blitheness only the very rich can get away with, and in the final weeks before opening was forced to hand over creative control to a German and Austrian artistic team who had escaped Nazi Germany.

Allam and Nancy Carroll are first class as Christie and his wife: he full of bluster, brawn and passion; she sensible, charming and forced to accept she can expect no favouritism from the Germans. Jeremy Herrin’s direction is elegant and fluid, while Bob Crowley’s starkly lit, beautifully composed stage designs are magnificent, like Old Masters paintings.

The Telegraph – The Moderate Soprano at Duke of York’s, review, 16 April 2018

Herrin’s sensitive direction and a top-notch cast led by Allam as Christie and Nancy Carroll as his wife, with Paul Jesson and Anthony Calf as the senior Germans (…) 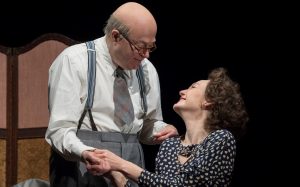 Hare’s play is a green and pleasant window into high-cultural life in the 1930s and beyond. It’s brought to life by pitch-perfect acting, especially from Roger Allam, who does complete justice to John Christie – an officer who read poetry to his men in the trenches, bought a lab to secure a job as science master at Eton, married for the first time at 50, and made his private passion a public spectacle that thousands of people still trek to in posh frocks to experience.

The viability of the whole affair rests squarely on the shoulders of Roger Allam, whose winning portrayal of Christie – a John Bull-ish embodiment of traditional English values such as amateurism, anti-intellectualism, and industriousness – packs so much naïve charm it should silence even the most virulent of class warriors. He is well matched by Nancy Carroll, as Audrey, who makes their unlikely marriage believable, and deeply affecting.

City A. M. – The Moderate Soprano is an emotionally weighty docu-drama exploring the origins of the Glyndebourne opera festival – 19 April 2018

Christie – brought to life with enormous panache by the fine Roger Allam – manages to recruit a dream team of brilliantly creative individuals to launch his venture only because they all happen to be refugees from Nazi Germany with not a lot else to do.

(…) this is necessarily a lighter and more quirky affair because of the rustic setting and Christie’s infinitely more benign brand of tyranny. It is a play about Britishness, snobbery, culture shock, and, above all things, how individuals can achieve so much more when they put aside their egos and work together. This stylish and highly intelligent Hampstead Theatre production – directed by Jeremy Herrin – is Sir David Hare at close to top form. Just as the opera house that Christie created went on to have global significance, so this story of a group of motley Europeans striving for perfection in the Sussex countryside more than 80 years ago is really also a lot more than the sum of its parts. At its heart is one man’s journey towards becoming a fully-fledged member of the human race.

Played with brio by Roger Allam (…) As old-school a treat as the Fortnum’s tea Christie solicitously brings Audrey, this left me longing to return to Glyndebourne.

3 thoughts on “The Moderate Soprano: reviews”