Not only did the premiere of Endeavour do rather nicely in the ratings (an average audience of 5.9 million and a 23.4% share), the reviews were overwhelmingly positive. We’ve collected a bunch of online reviews, and of course All-Allam also reviewed ‘Girl’.

“Allam, armed with that mellifluous voice of his, was the episode’s secret weapon,” says The Telegraph. 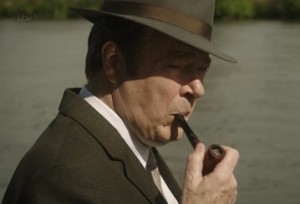 Mail Online: “[Allam] is the star of Endeavour. [He] dominated every scene he played.

“It’s as if he were never destined to play anything else. Big, jowly, with a well-styled trenchcoat, buffed size 12s and, very presumably, a vest: he inhabits his own skin wonderfully wisely.” (The Observer)

“When Endeavour’s done its run, they can do a series called Thursday. And run it on Sunday.” (The Arts Desk)

From The Metro: “It made you want to see more.”

As Mozart’s Mass in C Minor renders a Physics class and a haircut unusually dramatic, every Inspector Morse lover in the country must have felt as if there had been a homecoming of sorts.

There was a great sense of familiarity in ‘Girl’, with old characters given new faces and the traditional Oxford setting given appropriate period trimmings, but this in no way bred contempt. It was a delight to hear the echoes of Morsepast in every aspect of the production, from Barrington Pheloung’s soundtrack which even the most casual of viewers of the old series couldn’t have failed to pick up on, to direct script echoes to delight more ardent fans (the dialogue about how Morse is a ‘good detective’ but a ‘poor policeman’ is, for example, directly reminiscent of Morse’s self-analysis in ‘Second Time Around’).

The most notable returns,

however, come in the form of the characters of Morse, Max and Strange. There is no element of mimicry in Shaun Evans’s portrayal of young Endeavour Morse and yet it was never once to be doubted that this is the young man who will one day grow up to resemble a cantankerous John Thaw. Following on from his sterling performance in last year’s pilot episode, the Liverpudlian actor has crafted youthful Endeavour as a man who is as troubled as he is gifted, and it is wonderful to see so much opportunity for character development within a detective drama. James Bradshaw’s Dr. Max DeBryn, too, though only present for a brief time, left a strong and complex impression: it is atypical of the genre to have a pathologist quoting from Alexander Pope.

A particularly triumphant addition to this series was the figure of Not-Yet-Superintendent Jim Strange. I would quite happily watch a series which focused solely on ‘the adventures of Morse and Strange,’ with the latter providing a salt-of-the-earth, no-nonsense (one might say ‘Doctor Watson-esque’) juxtaposition to Morse’s more jittery ‘Holmesian’ intellect. Sean Rigby’s portrayal of Strange is, again, by no means an imitation but yet his character is ‘Strange’ beyond all doubt, right down to the familiar verbal cadence and vocabulary, ‘matey.’ Also new to the series was Anton Lesser’s spectacularly misnamed Superintendent Bright whose love of ‘rules and regs’ provided Morse with an oft frustrating antagonist which strengthened the plot no-end.

The story line of this episode was gripping and intricate with wonderful contextual nods and a complex conclusion that only Morse could have come to (though one wonders how ‘Oxford City Police’ ever managed to make any arrests prior to his arrival if all the cases they had tackled are like this one). Though deeply engaging, there were moments when Russell Lewis’s script faltered somewhat. ‘Digitalis’ (commonly known as ‘foxglove’) is referred to as ‘deadly nightshade’- though not by Morse- and many a frustrated viewer must have wondered why a vicar in a hurry failed to hop back onto his bicycle. On occasion, too, the seams showed and it became obvious that dialogue was scripted and that the person writing the lines of questioning was also writing the responses- take this section of between Morse and the scholarship student, Denis, for example:

‘Morse: If I notify the college, you’ll be sent down
Denis: If?
Morse: you’ve worked hard, don’t throw it away over nothing
Denis: Nothing? … [Describing his tutor’s manner] … just an act
Morse: An act?
Denis: He’s going to America
Morse: America?’ 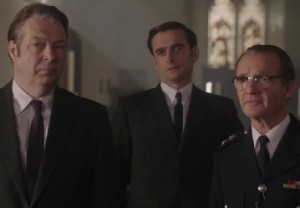 There were also various points at which characters used lines that directly echoed either the script of the pilot or of an episode of Lewis, but this continuity of writer does help the main characters to feel more authentic; this is particularly the case with Detective Inspector Fred Thursday, who feels very real after just two appearances. It will come as no surprise that my favourite character is Roger Allam’s Thursday, whose every action speaks of a gravitas which Morse has yet to acquire. Thursday’s half wink, half grimace at Morse when he arrives late for work essentially sums up their relationship in one gesture; the senior officer is as exasperated by his protégée as he is fond of him and in equal parts cross with Endeavour for playing the part of ‘great detective’ rather than ‘humble policeman’ and filled with admiration for his ‘elementary’ lines of reasoning.

Roger Allam’s superb performance as Thursday more than merits a review of its own, but I will save this for later when more is known about the character (though I do like the idea that the Radio Times put forward, that he should have his own spin-off series). All aspects taken into account, ‘Girl’ was an excellent series opener, and I personally cannot wait to see how this series progresses and how the characters develop.

One thought on “Endeavour S01E01: Reviews”