With Endeavour on our TV screens for the next four Sundays, here’s a look ahead at what’s to come in the episodes.

If you want the content of the series to be a complete surprise then stop reading here.

Synopsis: When a young secretarial student, Margaret Bell, dies suddenly at home, Endeavour senses there is more to the case than the preliminary medical verdict of ‘heart attack.’ Now working out of Cowley Police Station, Endeavour has unofficially assumed the role of ‘bagman’ to Inspector Fred Thursday. However, newly arrived Superintendent Bright has other ideas, and when a respectable GP is found shot dead in a public lavatory, Endeavour’s outlandish theories soon see him relegated to General Duties. Humiliated and humbled, Endeavour has to investigate from the side-lines. Through a puzzling haze of deceit and misdirection involving an Oxford physicist who has worked on the atomic bomb and the fate of a vulnerable single mother, Endeavour is forced to question Thursday’s orders and risk his career to avert a family tragedy.

Thoughts: Set in 1965, it is entirely possible that this episode’s title is a reference to the Beatles song with which it shares a name. If this is the case, then the final verse of the song might provide some interesting insights into what we might expect (this is a murder mystery 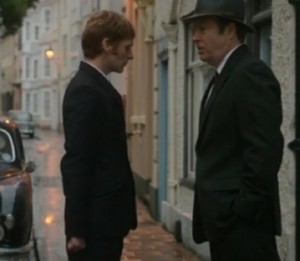 Was she told when she was young that pain
Would lead to pleasure?
Did she understand it when they said
That a man must break his back to earn
His day of leisure?
Will she still believe it when he’s dead?

I’m probably reading too much into this (this tends to happen), but it’s an interesting possibility nonetheless.

There only appear to be two murders in this episode, which, at an average rate of one per hour of the episode, is quite a low death count for ‘Morseified’ Oxford. We can expect the focus of this episode to be less on the crimes themselves and more on the introduction of new characters and the relationships between Morse and Thursday. Morse’s impetuous disregard for orders might have served him well in the pilot episode, but now that Thursday has to justify his decision to take the young policeman under his wing there’s going to be considerably more tension between them. Personally, I love this kind of character and relationship building, so I’m looking forward to that.

ITV’s Press Pack Logline: A new kind of killer haunts the Oxford twilight, as, for Endeavour and Thursday, its dreaming spires give way to a waking nightmare.

Synopsis: An unknown menace stalks Oxford, striking fear into the hearts of its citizens. At first glance, the killer appears to be just another deranged lunatic, striking at random, but Detective Constable Endeavour Morse uncovers an underlying method to the madness: the elaborate staging of the crimes suggests the killer shares Endeavour’s passion for opera…

While Oxford City Police scramble to find the next potential victim, it seems that Endeavour has finally met his intellectual match. As the body count increases, letters containing cryptic clues, goading the police for their failures, are sent to the Oxford Mail; only a detective of Endeavour’s intellect can break them. An emotionally operatic epic, ‘Fugue’ combines the very best of the original series (‘Masonic Mysteries’) with a dazzling resolution that will push Endeavour to the fringes of his own sanity, as he is drawn into an elaborate scheme in which he is destined to become an integral part. 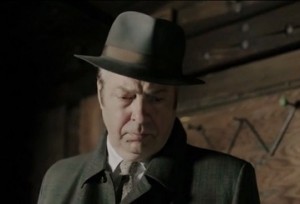 Thoughts: The title of this episode, again, seems to be telling. In musical terms, fugues involve two or more voices singing at counterpoint, with the figures demonstrating independence of ‘thought’ whilst also sharing a dependence on each other for the overall composition (cue obvious parallels with the relationship between the police and criminals). An additional point of interest from this title comes from Morse’s interest in classics; the word ‘fugue’ has its Latin roots in the words ‘fugere’ and ‘fugare’ which mean ‘to flee’ and ‘to chase’ respectively- clever, eh? This dichotomy is certainly apt, given the apparent confusion in this plotline as to the identity of ‘hunter’ and ‘hunted.’

I’m thrilled that this episode apparently has so much in common with the ‘Masonic Mysteries’ episode of the original Morse series. It’s by far my favourite and, if this episode lives up to its promise, expect drama, intrigue, psychological torment on the part of our young protagonist (and, indeed, his mentor) and considerable emotion. In conclusion, then, this is certainly an episode which is not to be missed, and also a welcome return of the high body counts of old (what? I like murder mysteries having a lot of murders in…) Just a brief thought, though: were murders in Oxford always opera and crossword based, or did this just start when Morse joined? In the case of the former, I’m not sure how the police managed to solve anything at all prior to his arrival; in the case of the latter, this all seems very suspicious to me!

Synopsis: The prospect of a visit to Oxford by HRH Princess Margaret, who is to unveil the British Imperial Electric Company’s latest weapon of mass destruction- the ‘Standfast’ Mk II missile- at Cowley factory, has put a spring in the step of Chief Superintendent Bright. Endeavour, still languishing on General Duties, is excluded from the event, but no sooner has the ceremony drawn to a close than he finds himself deeply embroiled in the affairs of the factory and its owners, the darky dysfunctional Broom family. An unpopular worker, Percy Malleson, has been found murdered in a secluded area of the shop floor.

One of Malleson’s colleagues, Lenny Frost, is a prime suspect- there is bad blood between them resulting from an industrial accident. Bright, under pressure from above, is eager for the case to be resolved as quickly and quietly as possible. However, Endeavour, brought into the intoxicating orbit of Alice Vexin, who carries a torch for him from their student days, remains unconvinced that this is such an open-and-shut case. Endeavour’s dogged pursuit of justice offends both Bright and the factory’s top brass, as he exhumes secrets that many would rather have remained long buried. 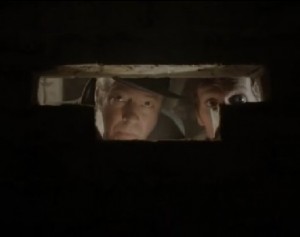 Thoughts: It’s wonderful to see the details of 60s context in this show; ‘Rocket’ promises to bring with it various references to the cold war and protesting hippies as well as the glimpses of royalty mentioned in the synopsis. It’s interesting that Morse seems to find himself on General Duties for three of the episodes and I look forward to seeing how he managed to solve the mysteries despite this not insignificant obstacle. I imagine his ‘dogged pursuit of justice’ here won’t upset Thursday anywhere near as much as it will Bright as we’ve seen from the pilot that he’s in no way opposed to bending the established rules in order to right a wrong.

ITV’s Press Pack Logline: As the shadow of East End villainy falls upon Oxford, a hit and run accident claims the life of an eminent Classics Professor. Endeavour and Thursday must each face their past. Not all stories have a happy ending.

Synopsis: Oxford lies in the grip of a bitter winter. Endeavour crams for his upcoming Sergeant’s Exam, but a road traffic accident sets events in motion which will lead to the Moonlight Rooms nightclub and a blood reckoning. The hit and run victim is an Oxford professor who died at odds with his peers over the fate of Booth Hill- a potentially lucrative parcel of College owned land.

The case is further complicated by the appearance of Thursday’s old gangland enemy, Vic Kasper, whose arrival in Oxford carries a direct threat to all Thursday holds dear. Endeavour is drawn back to Lincolnshire to visit his ailing father, leaving Thursday to face his demons alone. However, when a cigarette girl working at the Moonlight Rooms is found dead, Endeavour must choose between filial duty and the need to protect Thursday, whose righteous anger has led him into a dark and potentially fatal place.

Thoughts: This being a Roger Allam website, I feel it’s entirely justified for me to express my delight about this Thursday 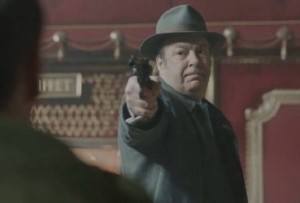 -centric episode. Even though he, unlike Endeavour, was an unknown entity prior to the pilot, the Inspector has already been established as a fantastically complex character and I absolutely cannot wait to find out more about his background. This is beyond doubt the episode I’m looking forward to the most and I fear I can’t say much more about it or I’m liable to write an essay. I’ll save that for later!