“If Shaun Evans ever gets tired of playing the young Morse, the franchise could happily branch out into “The Inspector Fred Thursday Mysteries”. As Morse’s world-weary boss, Roger Allam is wonderful, forever in danger of stealing the show.” (Radio Times)

They’re a good double act with an interesting working relationship: at times awkward, but with an underlying mutual appreciation that in this one almost bubbles over into affection. Steady, it is only 1965.” (The Guardian)

“Roger Allam as Morse’s immediate superior, DI Thursday is a real scene stealer. Why does the 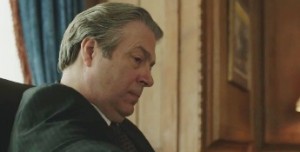 phrase ‘cool cat’ come to mind with him?” (Insidemediatrack)

The new BBC 2 drama The Politician’s Husband, in which Roger Allam plays the Chief Whip, received some mixed reviews.

“It’s melodrama, and a lot of fun, a big boiling pot of hot, lusty power soup, with crunchy croutons of deceit and a generous sprinkling of revenge.” (The Guardian)

“The Politician’s Husband’s immoral protagonists were difficult to care about.” (Metro)

One thought on “Reviews & ratings: Endeavour / The Politician’s Husband”