Endeavour returns! Marking the 30th anniversary of Morse on ITV, the popular detective dramas back with a highly anticipated fourth series, penned by acclaimed writer Russell Lewis. Reprising his role as the young Endeavour Morse, Shaun Evans stars alongside Roger Allam as mentor, Detective Inspector Fred Thursday, for a brand new set of complex cases. The fourth series begins in the summer of 1967, barely a fortnight having passed since the events of the Series 3 finale, and we find Oxford’s finest picking up the pieces of their lives, both personal and professional.

Whilst Thursday and his wife Win struggle to process the departure of both their daughter Joan and their son Sam, Endeavour waits nervously to hear the result of his Sergeant’s exam. Throwing himself into his work to mask the heartache of Joan leaving, Endeavour is quickly consumed by his duties with an array of new, perplexing cases landing on his desk.

The first of four episodes (Game, Canticle, Lazaretto, Harvest) will air on Sunday 8th January 2017 on ITV at 8 pm. You can watch the trailer here. 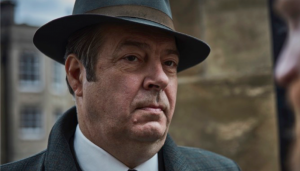 Q: How does it feel to return to the role of DI Thursday and where do we find him at the beginning of the series?

“It’s great coming back to him. I’ve always enjoyed playing Fred. At the beginning of this series, it’s only a few weeks ajer the last one and the big emotional story is really Joan and what’s happened to her. She’s left home and she’s not contacted them so they’ve no idea where she is. There’s a huge difference between the Thursday household at the beginning of this series and how we’ve seen it in other series in which it’s been this incredible Dickensian place of warmth and domesticity which Endeavour is on the outside of.”

“Win reacts by firstly by thinking she has to keep herself occupied so she gets a cleaning job and starts to go to Keep Fit classes, whilst Fred going into a hugely depressive slum and doesn’t seem engaged with work anymore. Then, as the series progresses, Win becomes very depressed. She forgets about the cleaning and the Keep Fit and gets very low as Joan hasn’t rung and Fred hasn’t been able to find her even though he’d been puxng out the feelers. He then discovers that Endeavour found out where Joan was and went to see her but didn’t tell him. This results in a great deal of scratchiness between them.”

Q: Does this tension affect their professional relationship as well as their personal one?

“Occasionally it does a bit, but they still work as a team. There’s always been Endeavour’s slight disapproval of Fred using his fists and being much looser with the rules – being less correct that Endeavour is – so that’s still there too.”

Q: Do you think this is why they work well together? They almost form a good cop, bad cop duo?

“There’s an element of good cop, bad cop, but what Fred saw in Endeavour right from the off was that he was someone that brought something else to the team, the collective enterprise.”

Q: What kinds of complex cases can viewers expect to see this series?

“In the first one, we see an early computer the size of a large room, playing chess. Eventually, something that computer can do helps in the solving of the case. There’ve been these strange multiple drownings. The first one seems like a potential suicide and there’s a lot of tension between Endeavour and Thursday over that as Fred doesn’t think there’s a link between the first two drownings and Endeavour thinks there probably is. Irritatingly, he’s right!”

Q: This series is set in 1967 – what do you think being set in this era brings to the series? 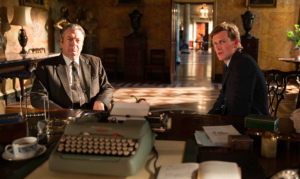 “I think it’s interesting both for people who lived through that era and for people who are younger than that. Just to see how we were, not so very long ago. How we didn’t have phones or computers and stuff that we now take for granted. There weren’t nearly so many cars around, there weren’t hundreds of television channels – things like that. The different way that we lived then but also the very similar way. There’s always a whodunit, as well the emotional story of the regular characters.”

Q: You’ve filmed in some brilliant locations again this series. Which did you enjoy most?

“We filmed at Buckingham Palace, but for not long at all. We also went to West Wycombe House where curiously I’d done a film the Autumn before so I was very familiar with it, but it was very strange being back there.”

“It’s also lovely going to Oxford, but very difficult to film in as you’re doing a period drama in Oxford where it’s very crowded. For any outside or street scene, the art department have to try to clear away anything that reminds us that this is the present day. So it’s quite a business filming in Oxford.”

Q: 2017 marks the 30th anniversary of Morse on ITV. How does it feel to be part of such a well-loved British institution?

“It’s great, it’s lovely. People who watched the original Morse seem to love the series and people who didn’t also seem to love it. It’s not something that you’re especially conscious of though when filming. You’re just making the script in front of you.”

Q: Can we expect any familiar guest stars, cameos or characters from the Morse series in the new films?