The new series of The Missing starts on 12 October on BBC One at 9 pm.

The first series followed two parents faced with their worst nightmare: their son, Oliver, goes missing when they’re on holiday in France. The second series is not a sequel, although the French detective Julien Baptiste (Tchéky Karyo) is once again on the case. Instead, it a explores a new drama, tackling a different aspect of the missing person ordeal – when the person is found.

A young British woman stumbles through the streets of Eckhausen in Germany and collapses. Her name is Alice Webster (Abigail Hardingham), and she was abducted from the same town 11 years ago. Her return sends shockwaves through the tight-knit local community, and the lives of her parents Sam and Gemma (David Morrissey and Keeley Hawes) and brother Matthew (Jake Davies) are thrown once more into turmoil.

As the search for the abductor gathers pace, Alice appears to hold vital clues to the whereabouts of a second missing girl, Sophie Giroux, whose disappearance was investigated back in 2003 by Julien Baptiste. This leads him to Northern Iraq, with the help of foreign journalist Stefan Anderssen (Ólafur Darri Ólafsson), in search of the young soldier Daniel Reed (Daniel Ezra) who worked on the base, and is first shown attending his father’s funeral. 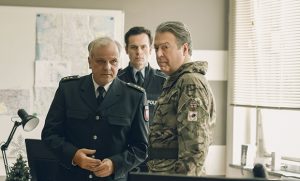 Roger Allam plays Brigadier Stone, the commander of the base in Eckhausen. He is a dedicated man who attempts to liaise with the German police on this sensitive case. His daughter is Sergeant Eve Stone (Laura Fraser), the Military Police officer on the base where the Websters live and who, despite being heavily pregnant, takes charge of the investigation after Alice returns. There’s also Jorn Lenhart (Florian Bartholomew), an officer with the local German police who has sharing jurisdiction with the Military Police, who becomes caught up in the Webster case.

Like the first series, the story follows two timelines: when Alice first reappears in Eckhausen in 2014, and the present day, when cracks between the Webster family members have exacerbated over the course of two years.

The 2014 segments of the show were shot in Germany and Belgium, with the Belgian town of Malmedy being a key location for the town of Eckhausen. The Iraq scenes were filmed in Morocco, were producers constructed “burned-our and destroyed buildings” in the desert sands.