Game opens with an ethereal and sad score as reminders of Coda flicker in front of ours and Morse’s (Sean Evans) eyes. When the score crescendos we are thrown into the plot of the new episode with the discovery of a body in the river.

The return of Endeavour has been eagerly anticipated since Coda’s devastating ending last series. Game picks up the story only two weeks after the events but much has changed, leaving everyone is grieving in their own way. Morse appears to have fallen back on his traditional blend of whiskey and music while the Thursdays have settled into an uncharacteristic distance from each other.

If Coda left us with a confused Morse, Game gives us a tired and bitter one, though not without reason. The anticipation of the sergeant’s exam is dashed soundly when DCS Bright (Anton Lester) reveals that the exam paper was reported lost, resulting in an automatic failure. For Morse, this leads to an anger that he cannot wholly shake.

At the Thursday household, the morning routine into which we have watched Morse awkwardly shuffle himself is all but gone. Neither Fred (Roger Allam) nor Win (Caroline O’Neill) know what to do with themselves in the wake of Sam joining the army and Joan’s sudden departure. Fred is sinking into a slump and Win desperately tries to keep herself busy. Even the sacred sandwich schedule has been upset by the events.  There is but little of the warmth we usually see between them, just the dispassionate energy of two people going through the motions–players of a game neither is truly invested in at the moment. 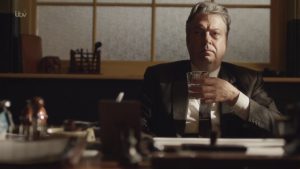 Similarly, chess (perhaps the most cerebral of all games) is a motif that plays through the episode right into the heart of the mystery itself. A chess match between man and machine provides the backdrop for the episode’s mystery as it turns out that the body in the river was one of the people working on a thinking machine. The human opponent being a soviet professor brings the trappings of the Cold War to Endeavour which had thus far been absent.

All is not as simple as first thought, however, as a second body turns up in short order–one that Morse insists is likely connected to the first. The mood of Game quickly darkens: not only are more clues unearthed and more bodies found, but Thursday and Morse are at odds, Bright warns Morse that he has made powerful enemies, and even Jim Strange (Sean Rigby) has a sombreness about him. Nevertheless, the cast are in fantastic form. It is always good to see Max DeBryn (James Bradshaw) in full sardonic wit – it will be a while before I’ll want to eat Roquefort again – and WPC Trewlove (Dakota Blue Richards) is wonderful as ever. Watching her flex her intellectual muscles (especially when faced with casual misogyny) is a special treat, as is Bright’s muted approval immediately after. 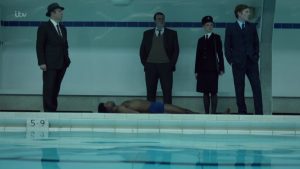 Harold Wilson’s ‘white heat of technology’ speech is  key focus of this episode. The idea of creating a computer that can out-think a human could have been turned into a miniature Cold War played out over a chessboard, but the Joint Computing Nexus (or ‘Jason’ for short) ends up being a key player in solving the case for Morse and Thursday. As a result, the mystery is wrapped up surprisingly quickly, leaving us clinging to the edges of our seats watching the, quite literally, explosive climax.

In the end, not all is unremittingly bleak. The final scenes of Game give us some hope for the future of our favourite detectives. The road will be far from smooth and Bright’s warning that Morse has made powerful enemies in the upper echelons of the police force is bound to be prophecy, but Morse is where he should be and seems to be staying there. 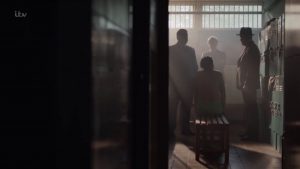 2017 marks the 30th anniversary of Inspector Morse on ITV and we can expect a few nods to the original series, from the odd portrait of Colin Dexter (bowing out of his famous cameos) to actor James Laurenson’s (Prof. George Amory) return, having appeared in the very first episode of Morse in 1987.

This is a fantastic start to the new series. With the anniversary motivating stellar writing, acting and directing, we have much to look forward to!