In ‘Canticle’, Endeavour turns once again to the world of music- but not as Morse (Sean Evans) knows it, and even the familiar classical openings give way to a bright, cheerful pop song. Set against the backdrop of shifting tastes, the episode finds Morse in a near perpetual state of unbalance.
DI Thursday is back to work after his emotional lapse last week, but the spectre of Joan’s abandonment is still dogging his steps. To enable himself to move past his loss, Thursday is working to convince himself that his daughter will not make contact, and that she wants nothing further to do with him. The effect of this determination is obvious, as he withdraws from reminders of her existence, even pretending not to remember simple facts about her interests when Win (Caroline O’Neill) brings it up. 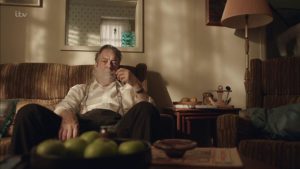 Fred is kidding himself, of course, if he thinks he can simply compartmentalise and forget how much Joan means to him. His responses to the strained relationship between Mrs Pettybon (Sylvestra Le Touzel) and her daughter Bettina (Pearl Chanda) show it, most explicitly in a scene where he tells Mrs Pettybon directly that if her daughter leaves her, she won’t be coming back. Throughout, Roger Allam paints a quietly devastating portrait of a man trying to give up hope for the sake of his own sanity.
As for Morse, he’s already no stranger to concealing hurt and loneliness behind work, music, and the occasional stiff drink. Still, even before the painful conclusion to this episode, one can tell that not all has been set to rights. His judgement appears even more vulnerable than usual to its old Achilles-an invitation to drink with a pretty girl- which lands him in hot water more than once in this episode.
One of these incidents confirms- as though there was any real doubt- that Morse’s frustration with Superintendent Bright’s (Anton Lesser) attitude has not softened much since the events of ‘Game.’ This time, Morse has less justification for his anger. After all, he allowed himself to be led into a potentially compromising position, but that doesn’t stop him objecting to Thursday’s assertion that Bright has Morse’s own best interests at heart. 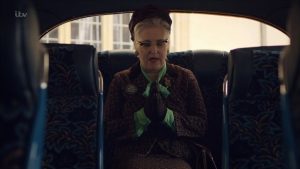 On the other hand, his friendship with WPC Trewlove (Dakota Blue Richards) is simpler. She’s is on hand to fill the gaps in his knowledge of pop culture, just as in ‘Game’, which gives Morse key pieces of information to shatter a suspect’s alibi.
Having decided to ‘make a stand’ in Oxford, despite the hampered career he faces by doing so, Morse appears to have developed an even lower tolerance for signs of outside interference in the workings of the police. Perhaps this is just as well, since almost no-one he meets in the course of his duty this week seems content to let the police be impartial in the execution of their duty. 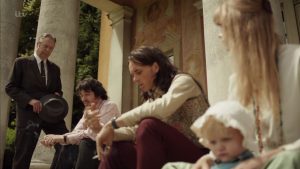 Both of his assignments also reveal a set of people preoccupied with maintaining separate public and private faces. Though The Wildwood music group and moral crusader Mrs Pettybon are presented as occupying very different moral planes, they both depend for their livelihood on presenting a cleaner, more virtuous public appearance than their private reality.
The inner turmoil of the members of Pettybon’s entourage is revealed in a short sequence of scenes which are rightly uncomfortable to watch. ‘Canticle’ here avoids giving its audience the satisfaction derived by seeing some villain drop their mask behind closed doors, pleasurably confirming our suspicions. Rather, these reveals are made through scenes which emphasise the weakness and humanity of these people, and force us to feel instead the discomfort that results from viewing something that feels genuinely private.
While Mrs Pettybon tries to purge her personal history, the Wildwood boys close ranks to conceal issues of drug-taking and sexuality. Throughout, this episode showcases the deep hurt that is caused when people are forced to conceal and even fear their own sexual and romantic feelings. 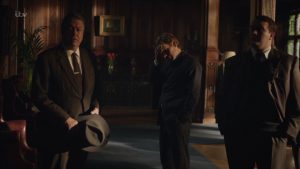 It can be a difficult issue to tackle sensitively, and this episode successfully avoids heavy-handed messaging, allowing the audience to perceive the human experience being lived beneath this struggle of values. What it does not shy from, however, is condemnation of the hard-line attitudes which Mrs Pettybon and her followers use as an excuse to attack those whose lifestyles they disapprove of. Bettina openly confronts her mother on the way her adherence to this black-and-white approach has taken her away from the spirit of the faith she claims to hold: “You’re not kind. You’re wicked. And godless!”
It’s an ambitious episode in many ways, rightfully uncomfortable in parts, which makes a thoughtful contribution to a discussion that, as ‘Canticle’ shows, concerns real lives. The episode never allows us to forget that, and it is this that gives it real strength.