There’s a whole clutch of first-rate performances here but the greatest emphasis naturally falls upon Roger Allam’s Brandt and Conleth Hill as Guillaume. Both are superb. Allam is highly persuasive as a man of integrity who could command loyalty and affection by the simplest of gestures

Roger Allam’s Brandt is one of the best portrayals of a politician I have ever seen in that it shows how total public command coexists with depressive private uncertainty.

Roger Allam is masterly as Brandt, in an affectionate, sometimes ambiguous portrait, conveying all those contradictory opinions about him. 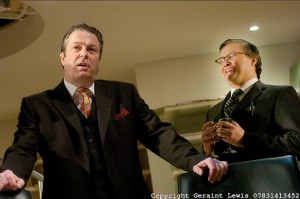 Roger Allam’s Brandt moves to the centre of the play now as both a moving and believable dramatic character and a fascinating guess at the reality.

I liked Roger Allam’s performance, there was a sense of a political instinct which is normally associated with a ruthlessness that politicians tend to have. But with Brandt, and with Allam, there was sense that there was a lot of sincerity there, and that is a very difficult line to tread.

– Theatre Voice, 12 September 2003. The full audio review is available for listen and download at TheatreVOICE.