Is it the sight of that excellent actor Roger Allam, and that distinguished director John Caird, demeaning themselves with such tosh? 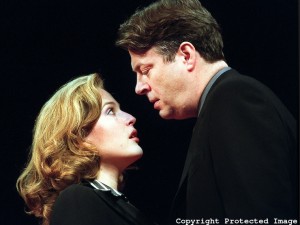 She is strongly partnered by Roger Allam, who catches precisely Adam’s mixture of cool calculation and desperate love: even if the character wants, so to speak, to have it both ways, Allam implies he still has an obdurate decency.

What the play is really lacking is passion. Somehow these two are not convincing as a couple. The sexual chemistry seems to be missing. Anderson’s delivery is very matter of fact, straightforward, so quiet that, at times, it is almost hard to hear. In the male half of this two-hander Allam lacks charm.