Ian Rickson’s production of Conor McPherson’s new adaptation of Uncle Vanya has been filmed on stage at the Harold Pinter Theatre in August.

When London went into lockdown in March and theatres were forced to close, Uncle Vanya was in the final weeks of its scheduled, sold-out run. The acclaimed production had received Olivier nominations for Toby Jones (Best Actor Award), Ian Rickson (Best Director Award), Bruno Poet (Best Lighting Design Award) and Rae Smith (Best Set Design Award). Despite the entire team’s best efforts and wishes, the live production will not be able to return. However… 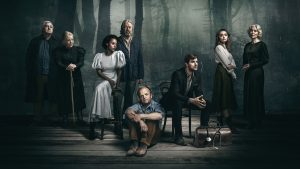 Sonia Friedman Productions and the BBC have partnered with Angelica Films to create a re-interpretation of the beloved stage production. Marrying the intimacy of film with the electricity of live performance, the team has made this far more than simply a film of the play.

Directed for screen by Ross MacGibbon, the film reunites nearly all of the original cast of the production that was in its final weeks when the country went into lockdown in March and theatres were forced to close. Toby Jones, Richard Armitage, Rosalind Eleazar, Aimee Lou Wood, Anna Calder-Marshall, Dearbhla Molloy and Peter Wight were able to return to the Harold Pinter Theatre to film alongside Roger Allam, who joined the company as Serebryakov in place of Ciarán Hinds (who was unable to return due to conflicting schedules).

Roger Allam has previously played the title role, Vanya, in the 2012 production directed by Jeremy Herrin at the Minerva Theatre during the Chichester Festival Theatre. The play was a success, with applauded performances for the entire cast (read the reviews). 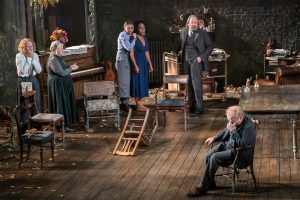 In the heat of summer, Sonya (Aimee Lou Wood) and her Uncle Vanya (Toby Jones) while away their days on a crumbling estate deep in the countryside, visited occasionally only by the local doctor Astrov (Richard Armitage).

Olivier Award-winner Conor McPherson’s new adaptation of Anton Chekhov’s masterpiece, Uncle Vanya, is a portrayal of life at the turn of the 20th century, full of tumultuous frustration, dark humour and hidden passions.

The strong original cast is enhanced by the addition of Roger Allam, effortlessly condescending as the pampered professor. ★★★★★
– The Guardian, Coronavirus gives Chekhov a shot in the arm

Quite a marvel, quite a must-see. ★★★★★
– The Telegraph, Chekhov’s gem, Covid’s grim echoes

Stage legend Allam (who was also in a run over at the Bridge Theatre when the pandemic hit) takes over Ciaran Hinds’ role as the unwilling patriarch seemingly unable to connect with his daughter or family members. Whereas Hinds had a cultured naivité, Allam is a blustering, almost insufferable man – the epitome of calculating negligence, wilfully oblivious to the daily toil he places on his family members. A scabby, shabby presence that upsets the pleasant languor that Wood and Jones instill. ★★★★★
– What’s On Stage, Uncle Vanya on screen

The new film version of the production will be shown in cinemas ahead of broadcast on BBC 4 on 30 December. This makes it the first UK stage production closed by the Coronavirus pandemic to have been filmed and produced for the screen.