Both Roger Allam and Rebecca Front have said they would love to reprise their roles in the political comedy The Thick of It. Allam even suggested a campaign to bring the series back on screen.

Rebecca Front, who played Nicola Murray in the series, recently told the Radio Times: “I’d have it run on a weekly basis from here to eternity if it were up to me. So yes, I’m really missing it and I will go on mentioning that to Armando Iannucci [creator of the series] every time I see him.” 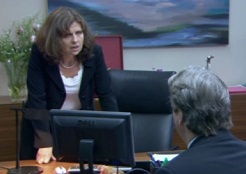 Roger Allam expressed similar feelings in a recent radio interview with Aled Jones: “I’m heartbroken that apparently we’re not going to be doing another series. Hopefully there’ll be some specials. Maybe I can start the campaign here.”

Allam talks enthusiastically about playing the much plagued and yet very popular character of Peter Mannion MP. “It’s the most enormous fun to do,” he says. “It’s a very releasing way to work, because you get a fantastic script, and we meet together and we read it, and then Armando might ask us to improvise, extend certain situations in it or make them a bit less scripting and then the writers go away and do a rewrite and then by and large some time later we’ll film it and during the filming, Armando might say “Could you maybe extend that bit there, or I don’t know, just see where it goes.” And because they film with two cameras on the move, constantly, there’s none of the usual thing of film and television of setting everything up into different shots and master shots and mid shots and close ups and hitting your marks and doing exactly the same thing every time. It’s much looser than that and for that reason, hugely enjoyable.”