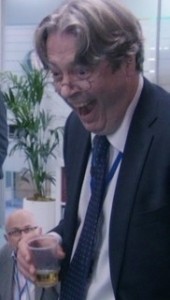 Roger Allam is nominated for a Best Actor Broadcasting Press Guild award for his roles in Parade’s End and The Thick of It. He’s up against two of his co-stars, Benedict Cumberbatch and Peter Capaldi.

Parade’s End will compete for the ‘Best Drama Series’ award against Last Tango in Halifax, Line of Duty and Sherlock. John Finnemore’s radio sitcom Cabin Pressure, with Roger Allam as Douglas Richardson, is nominated at the Broadcasting Press Guild for ‘Radio Programme of the Year’.

The Broadcasting Press Guild awards are voted for by television and radio journalists. The winners will be announced at a ceremony held in London on 14th March.

Outside Edge Theatre Company‘s Theatre Club view and discuss The Globe’s 2013 production of The Tempest. Roger Allam, who played Prospero, will join for an online Q&A.

Jeremy Herrin’s 2014 production of Shakespeare’s The Tempest is available on BBC iPlayer. Read the reviews.

Launch of Love in Isolation series by The Globe to celebrate Shakespeare’s birthday.

Rerun of the 2002 adaption of Fyodor Dostoevsky’s The Idiot on BBC Radio 4 Extra.

A thrilling drama by Caryl Churchill, which won the 2002 Evening Standard Award for Best Play. With Colin Morgan and Roger Allam, Polly Findlay directs. Until 14 March 2020 at The Bridge Theatre, London. Tickets & info.