A new series of our favourite cartoon has begun on CBeebies while the first series is being aired in the US on PBS Sprout.

(23 August 2013) The last series was a resounding success, with children and parents alike charmed by the ‘wide eyed, quacky, flappy’ (as the official website puts it) of Sarah (Tasha Lawrence) and her ever faithful companion, Duck. The last series outperformed the average viewing figures for its time slot and topped iPlayer charts thanks to well thought out stories, frankly adorable animations and the fine young actress playing Sarah’s interactions with the narrator, voiced by Roger Allam.
“We are thrilled that our wonderful characters have caused such a splash in their first year,” says producer and Karrot Entertainment co-founder Jamie Badminton. “Sarah & Duck has been created and made with a great deal of love and care and we’re delighted that viewers young and old have responded to them with such warmth and in such numbers.” 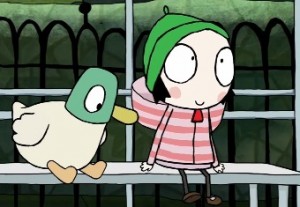 This show is well worth checking out, even if you lack a toddler to watch it with. Catch the new series of ten 7 minute episodes on CBeebies at 5:25pm from Monday to Friday and on iPlayer shortly after they air; American viewers can tune in for the first series PBS Sprout on weekdays at 8:30 ET. Also, given the popularity of the first series, episodes are now available to buy on iTunes with DVDs, plush toys, picture books set to hit the shelves in early 2014.