Endeavour returns with a fourth series, set in the second half of 1967. Barely a fortnight has passed since the events depicted in the series III finale, and we find Oxford’s finest picking up the pieces of their lives, both personal and professional.

Endeavour waits to hear the result of his Sergeant’s Exam, and self-medicates to numb his heartache, but whisky and Tännhauser will only get a man so far. Meanwhile, Thursday and Win deal with their own sense of grief.  Their home is empty: Sam has gone to the Army and Joan… Who knows where?

The summer of 1967 is on the turn. Midsummer has been and gone but in Lovelace College a team of boffins is about to unveil a ‘thinking machine’ that will challenge the Soviets, and plunge Endeavour and Thursday into their most perilous, baffling and darkly terrifying case to date. White Heat. Cold War. And an immortal game that will cast the life of a friend into the hazard. 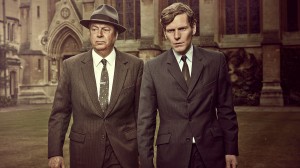 The stories that remain will take Endeavour and Thursday, together with the rest of Oxford’s Finest, into places hitherto unexplored – the worlds of 1960s pop; Doctors and Nurses; and an exploration of the English pastoral.

With 2017 marking the 30th Anniversary of Inspector Morse on ITV, viewers can expect many respectful tips of the trilby from Endeavour to its much admired progenitor in terms of guest casting, heritage characters and stories. Filming started end of May.

Joanna Lumley and Roger Allam reunite for a new series of Conversations from a Long Marriage on BBC Radio 4.

Talking Shakespeare: artistic director Gregory Doran invites Roger Allam for a Zoom call at 6 pm to talk about Shakespeare, the RSC and more.
Join the RSC to listen in.

Talking to Mariella Frostrup on Times Radio around 3pm about Talking Shakespeare and more.

Uncle Vanya is released in UK cinemas, with more dates and venues forthcoming. Watch the trailer and book your tickets here.

Outside Edge Theatre Company‘s Theatre Club view and discuss The Globe’s 2013 production of The Tempest. Roger Allam, who played Prospero, will join for an online Q&A.