As stated in Hampstead Theatre’s autumn season announcement, “Nobody can doubt 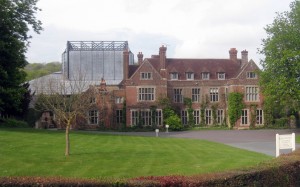 John Christie’s passion or his formidable will: he wooed his opera singer wife with a determination befitting a man who won the Military Cross. Now, in 1934, this Etonian science teacher’s admiration for the works of Wagner leads him to embark on an ambitious project: the construction of an Opera House on his estate in Sussex. But such is the scale of the enterprise that passion alone may not be enough. It’s only when a famous violinist is accidentally fogged in overnight in Eastbourne that Christie first hears word of a group of refugees for whom life in Germany is becoming impossible. Perhaps they can deliver Christie’s vision of the sublime – assuming of course they’re willing to cast his wife in the lead…

David Hare’s new play is the story of an intense love affair between some unlikely bedfellows, and of the unrelenting search for artistic excellence in the face of searing scrutiny, sacrifice and war.”

In the press release from Glyndebourne, Gus Christie, Executive Chairman of Glyndebourne, said: “I’m delighted that the fascinating story of the birth and early development of Glyndebourne will be brought to a wider public through this wonderful new play by David Hare. In 1934 my grandfather’s desire to build an opera house in the heart of the Sussex Downs was considered fairly eccentric but it proved to be a visionary idea and more than 80 years later Glyndebourne is still going strong.”

The Moderate Soprano is directed by Jeremy Herrin, with whom Roger Allam worked previously: he directed the actor in Anton Chekov’s Uncle Vanya at the 2011 Chichester Festival, and again two years later in William Shakespeare’s The Tempest at Shakespeare’s Globe. Writer David Hare enjoyed great success as screenwriter with films such as The Reader and The Hours, but is best known for his stage work, which include Skylight, Amy’s View, Plenty and Pravda, in which Roger Allam played media mogul Lambert Le Roux. In addition to this, the set is designed by Rae Smith of War Horse fame. Hampstead theatre’s artistic director Edward Hall heralded The Moderate Soprano and the other new play of the season, Mr Foote’s Other Leg, as “fascinating and entertaining”, both “inspired by true stories, marking a momentous time in British society while exploring the place of the arts in public life”.

The play runs from 23 October until 28 November 2015, with full cast released later this summer. For more information and tickets, please visit the websites of Hampstead Theatre and Glyndebourne.

One thought on “The Moderate Soprano”