Find out what the critics had to say about Roger Allam’s performance as Richard Wagner in The Madness of an Extraordinary Plan at the Bridgewater Hall, Manchester…

Roger Allam was commanding as Wagner, but chorus Deborah Findlay and Sara Kestelman had a trickier task switching between quotes from unannounced sources like Bakunin, Baedeker, Darwin, Dickens, Liszt, Nietzsche, Tchaikovsky and Wagner’s wives, Minna and Cosima. A case of not having much plot to use or lose. 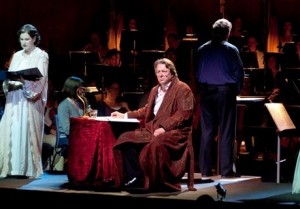 Roger Allam started to mutter, speak, declaim in that rich booming voice of his, articulating the revolutionary thoughts of the composer. (…)It was an insightful 50-minute Prologue (a sort of Act Zero), compelling and illuminating.

Roger Allam’s rich tones can make anything sound interesting and he has good support from Findlay and Kestelman, but this really is a piece that sounds lyrical but comes across for a lot of the time as dry, historical and educational and rather dull, with the occasional interesting moment.