Roger Allam has been cast as the lead role in the upcoming comedy film The Hippopotamus based on the bestselling novel by Stephen Fry.

Edit 28 May 2015: The film has been postponed to 2016. Filming will take place in August, 2015. The director is John Jencks. While the majority of the cast is still unknown, Sam Neill has been confirmed as Lord Michael Logan.

(23 May 2014) Produced by The Electric Shadow Company and scheduled for filming in August, the project is being pre-sold at Cannes by the Highland Film Group.

The following summaries of book and character contain some plot spoilers.

‘The Hippopotamus’ in question is Ted Wallace – the protagonist of the story, so called for his predilection for wallowing in long baths. Once a hell-raising poet, Ted had, until recently been tolerating his reduced position as a theatre critic following the tragic decline of his poetical talents. On being fired from this less-than-adequate job, and after his self-indulgent activities at a local club accidentally lead him to almost ‘spear’ his goddaughter, Jane, he finds himself headed towards the house and home of his old school friend and army colleague Lord Michael Logan and his wife to investigate mysterious events and so-called miraculous healings that seem to be going on under the Logans’ roof. 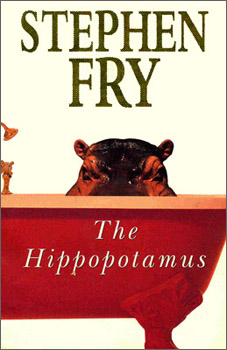 Ted’s reports back to Jane in the form of letters and her own responses along with various other correspondence from the other characters make up a fair section of the book as Ted works to establish the truth behind the rumours and whether the myriad people who have flocked to the miracle healer have wasted their time or not. Other colourful characters include a witty, camp and defrocked vicar, who delights in bestowing alliterative names on women he meets, and also Jane’s mother – a woman who, given their past history, Ted is not particularly keen to reencounter. The solution to the mystery and the way in which Ted deals with the resulting revelations and consequences are the climax of the tale.

A few further notes on Ted…

With all of his many characteristic traits and faults, Ted Lennox Wallace is probably best described as the epitome of wallowing self-indulgence – appropriate for a man with the epithet ‘Hippopotamus’ – who ambles through life in his disagreeable, whisky-fuelled ways in search of something to satisfy his obvious, lewd and yet at the same time completely credible priorities.