With the tinkling strains of Chopin echoing eerily from a music box and two hammer horror screams ringing out over a scene of Victorian carnage, the tone of the episode is set.

(25 April 2014) Writer Russell Lewis instils this episode with the fine traditions of old school horror from the ominous setting of a girl’s boarding school mostly empty for the summer, to portentous flickering lights and ghostly images only half glimpsed. This episode most definitely provides an education in the infinite capacity of school girls to be sinister. 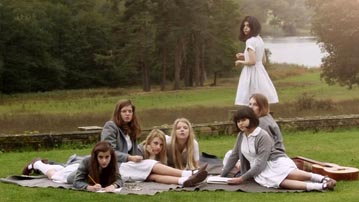 In true Morse fashion an admittedly already serious, but comparatively simple, case of a suspected murder/robbery soon transforms into something deeper and more disturbing as it becomes linked with disappearances at the school. Thrown into the mix are references to heraldic references – pleasing to Inspector Morse aficionados – and an American couple’s search for their grandchild.

History too is once more a watchword for the episode; a period drama within a period drama, it has an almost Inception-esque feel. The 1960s are in full flourish now, summer 1966 bringing with it multiple references to the World Cup Final which becomes a continuing motif against which the unfolding events at the school are pitted. The school itself appears to be caught in a temporal bubble. While the city of Oxford is clearly evolving (no mention being made in relation to Morse’s nurse neighbour Monica (Shvorne Marks) being a second generation immigrant; suggestions of sexual liberality on the part of Strange, of all people), the village of Slepe appears aptly named.

The events surrounding the school in 1966 are all in some way linked to bloody scenes that occurred there one hundred years before. “The past can only hurt us if we let it,” states one of the students with wisdom beyond her years, but it’s very clear that someone is very actively ‘letting it.’ Victorian prejudices (particularly colonial) are brought to the fore, re-echoed in the 60s setting.

Shaun Evans is once again fantastic as the titular character, showing the usual intellectual flair and the penchant for detail while never doing as he’s told. With this episode seems to come increasing comfort at being back at his work with the previous unease settling, if not entirely absent. But then with a case so full of spooks and unfortunate pools of blood, who would not be uneasy?

Of course, our favourite Thursday is in fine form and we receive more glimpses into the the dynamic of his household where it seems the steady progression of adopting Morse into the family fold is nearing completion.

The sympathetic Inspector continues his paternal interest in Morse’s wellbeing with more than a few concerned glances aimed his way, along with the usual frustration and bemusement. Indeed it seems that Morse has a knack of inspiring parental instincts, as well as an acute capacity for getting into trouble, as his nurse neighbour continues to care for her unofficial charge.

The supporting cast was again quite magnificent. Morse’s double date in particular gave series regulars Sean Rigby and Sara Vickers the chance to shine as PC Strange and Joan Thursday. We were also introduced in this episode to the Oxford County Police, whose feathers are ruffled by Morse and Thursday outwitting them on their own patch. Even the much maligned Bright (Anton Lesser) has his moment of strength and authority in the face of County incompetence, and DS Jakes (Jack Laskey) is really beginning to come into his own. 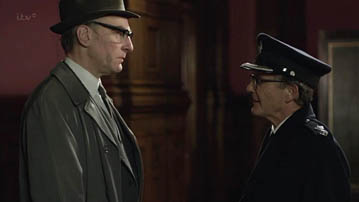 This is an episode in which sees even the usually unflappable pathologist Max DeBryn (James Bradshaw) distinctly out of sorts. The unsettling Gothicism that permeates the episode is reminiscent of Waters’s The Little Stranger or James’s Turn of the Screw (with more than a touch of The Shining at times!) Children form the drama’s centre and the naturally imposing air of brooding establishments such as boarding schools is used to great effect. Let’s face it, where would a boarding school be without a Bloody Mary myth. Despite the complex content, the pacing of the episode is excellent, maintaining the tension throughout. In Endeavour, Russell Lewis has crafted a show in which it is not the mysteries alone that leave audiences surprised as he takes a format (and a character) we thought we knew well and continually precipitates seamless evolution.

This was an episode of parallels: old and new; progress and stagnation; appearance and reality. Complementing the dynamics of Lewis’s script is Barrington Pheloung’s haunting score; it’s really must be a mark of how great a composer he is that he manages to merge his original accompaniments so seamlessly with the music of the great Chopin, from whose Nocturne the episode takes its name. 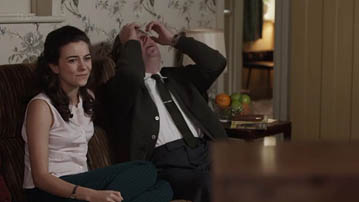 ‘Nocturne’ is most definitely a continuation of the standard we have come to expect from Endeavour, cast and crew alike. And with the tantalising summaries of the upcoming episodes featuring Thursday’s past and memories of the war rearing their ugly and upsetting heads, we have much to look forward to; though perhaps we ought to have tissues on standby.

(Review by Daisy and Kayleigh)