There comes a time in many people’s lives when they reach the Age of Allam. That’s Allam as in Roger, as in the star of the moreish new crime caper, Murder in Provence.

Before the Age of Allam you see Roger in the likes of Endeavour or The Thick of It and think, “What a gifted comic actor he is. If he’s in something I’ll probably watch.”

Then you reach the Age of Allam and it’s “What a gifted comic actor. Attractive, too. And so charming. If he’s in anything I will cancel EVERYTHING to watch.”

Roger did not disappoint as Antoine Verlaque, investigating judge in Aix-en-Provence. 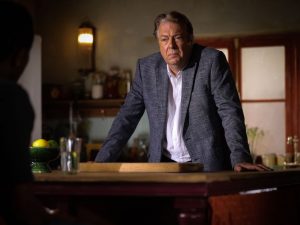 One useful guide as to whether any given contemporary British television drama is worth watching is to see if Roger Allam is in it. If the show is mediocre he will make it more palatable, as with Endeavour and Game of Thrones, and if the rest of it is great he will help render it sublime, as with latter series ofThe Thick of It, and the radio show he does with Joanna Lumley, Conversations from a Long Marriage. He’s in demand at the moment, which is a good thing, but you rather wonder whether producers are just “reaching for the Allam” in the way that inadequate cooks reach for the Schwartz jar of mixed herbs and throw a handful into whatever doomed concoction is disintegrating before their very senses on the hob. Well, I speak for myself.

With his grumpy but civilised and ineffably upper-middle-class manner, Allam infuses any role fortunate to have found him like a blend of Chris Patten and those much missed late actors Geoffrey Palmer and Robert Stephens. The role of Judge Antoine Verlaque in these adaptions of the ML Longworth could almost have been created for Allam. He’s a sophisticated soul from a rich family of grain merchants with an eye for fine art and spotting the flaw in a wrong ’un’s alibi. The series is set in gorgeous Aix-en-Provence, and the judge is not unlike a French Inspector Morse. They’ve even given him a nice classic Citroen DS to cruise around in, like Morse’s Jaguar.

Luckily, what Murder In Provence does have is the scarily reliable Roger Allam from Endeavour, jambonning it up as local crimefighter, Investigating Judge Antoine Verlaque.

Like a prime Alan Partridge, Allam has already expressed a strong desire for a second series – and you can see why. He clearly had a ball swanning around the south of France investigating crimes and delivering sarcastic quips and withering put-downs, like a glorious cross between The Thick Of It’s Peter Mannion MP and Endeavour’s DI Fred Thursday.

Murder In Provence would be worth watching for Allam alone, but he’s not alone. He’s more than ably assisted by the likes of Nancy Carroll as his lady friend Marine Bonnet; Patricia Hodge, playing Miranda’s – sorry, Marine’s – mother Florence; and The Greatest Showman’s This Is Me lady, Keala Settle, as Verlaque’s police sidekick Helene Paulik.

This series immediately sets off on a different footing than other British mystery shows that I’ve been watching recently. It’s a distinguishing factor, which, combined with the wonderfully captivating chemistry that is already on display between Allam and Carroll, the clever writing, the sure-footed direction, and the generally gorgeous surroundings, makes the series stand out. 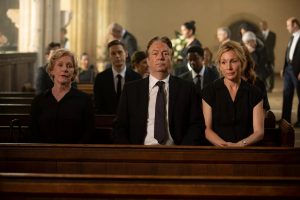 You can see why casting directors (and indeed viewers) love Roger Allam. He’s impossible to dislike. With that lugubrious shrug and Robert Palmer quiff he carries the Kitemark stamp of quality and makes anything watchable. If it weren’t for Allam’s handsome performance in Murder in Provence, I might have nodded off at times. Don’t get me wrong, it was gorgeous to watch, all those lovely French cameos a spa bath for screen-weary eyes, but, blimey, at times it was slow.

Verlaque is obviously French, but Allam’s natural demeanour is splendidly British. So he looks faintly ill at ease as he does the Gallic double kisses (he looks more comfortable knocking back the wine). The strongest element is Antoine and Marine’s credible relationship. He has prostate problems and said it’s like “peeing in Morse code”, while she has menopausal hot flushes. His former wife was an alcoholic who killed herself; Marine was knocked about by her ex-husband.

I liked that there was never a moment where you feared these two might drop their clothes and have sex. Instead he sat in bed trying to cool her down. Show me a straight middle-aged woman who wouldn’t kill to have Roger Allam fanning her hot flush with a lifestyle magazine and I’ll show you a liar. (17 July 2022)

Murder in Provence is still packing too much flab round its middle and is being carried almost entirely by the wonderful Roger Allam. But is it a nice escapist watch, full of rustic French aesthetic and everyone taking lovers? Yes it is. (…)

Still, I’m happy to bask in Allam, as judge Antoine Verlaque, saying to the murder suspect with full Peter Mannion sarcasm: “Well someone killed him, wouldn’t you agree?” They’re all also sinking so much booze and having such nice long lunches that it should be sponsored by the French wine industry. I’m envious. (24 July 2022) 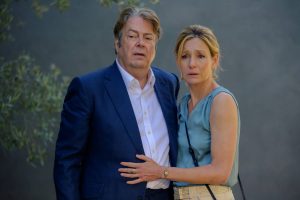 “Chic, sun-dappled, set in France – yet Murder in Provence is the most English drama on TV” – By Anita Singh for The Telegraph

Antoine and Marine are saved from terminal tweeness by Allam’s sardonic relish in his constant quips. He speaks every line as if he can taste the blood in it…With a classic Citroen and jeans two sizes too tight, Judge Antoine is a richly drawn figure: fussy, vain, courageous and maudlin.The other characters have less depth so far, but this was a promising beginning.

By Christopher Stevens for The Daily Mail

3 thoughts on “Murder in Provence : Reviews”