Produced by Mammoth Screen in a co-production with Masterpiece, each story in the highly-anticipated sixth series will once again be written by series creator Russell Lewis who has penned each of the 23 screenplays to date.

Filmed in and around Oxford, the new films will be executive produced by Mammoth Screen’s Damien Timmer, alongside writer and creator Russell Lewis and WGBH’s Rebecca Eaton. Deanne Cunningham has produced the series whilst Johnny Kenton, Shaun Evans, Leanne Welham and Jamie Donoughue act as directors. 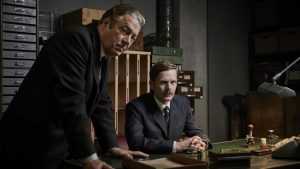 With the old Cowley team now scattered across Oxfordshire, Endeavour has reluctantly settled into a sedate way of life in an isolated countryside outpost. An uncomfortable Thursday also has a new role at the forbidding Castle Gate station, joining former adversary DCI Ronnie Box and his new sidekick DS Alan Jago. “Things are bad with Fred’s wife Win. She wanted him to retire but he can’t as he’s in financial difficulty after he was done out by his brother. With his son Sam in the Army and Joan not at home, it’s an empty nest. Home’s a chilly place…” explains Roger Allam.

Meanwhile, Strange has taken on a management role with Division, while Bright has been relegated to the Traffic department. The Summer of Love is well and truly over, and 1969 promises to be darker and more challenging than ever. However, despite their separation, the tragic murder of DC George Fancy still hangs over them both collectively and individually, with the case remaining unresolved. “I missed not having many scenes with Shaun”, says Roger Allam. “Fred took the fall for Fancy’s death; it plays on his mind.”

With the Cowley team scattered across Oxfordshire, Endeavour finds himself policing a lonely country patch, and back in uniform. His day job is a monotonous investigation of missing livestock and stolen tractors. But when he discovers the dead body of a missing schoolgirl, it opens this quiet backwater to the roar of Castle Gate CID now staffed by Thursday and an old adversary, the newly promoted DCI Ronnie Box, alongside sidekick DS Alan Jago.  “Neither the brutalist building (of the new station) nor Box’s aggressiveness are Fred’s style, but he’s knuckling down in order to respect rank. Even Box admits Fred should be at his desk, so he has respect but he’s seen as old-fashioned. Fred tries to get in step with them when they ask him to beat someone up…”

Box is keen to get Endeavour out of the picture, but when Endeavour’s own investigations manage to uncover a potential suspect, a homeless drug-fuelled teenager named Stanley, Box dangles the suggestion that the arrest could be Endeavour’s way back into CID.

However, when Thursday reveals to Endeavour that he knows the suspect from an old murder case, they start to worry that they have the wrong man. With Thursday’s hands tied, Endeavour resolves to prove the teenager’s innocence and uncover the truth behind the young girl’s murder. “In the first episode, he also looks back to an old case of a hanged man; I had to have younger make-up for the flashbacks.”

And does Thursday embrace the moustache and the flares? “Good Lord, no!” smiles Roger Allam. “There was a discussion about a wider tie, but I resisted that. People, especially of that generation, don’t say, ‘Oh God, I’ve got to change everything about my appearance.’ Indeed, it’s quite the opposite.” 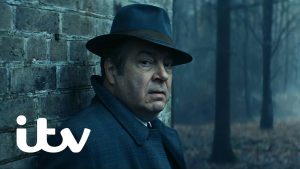 You may have spotted DI Thursday in ITV’s campaign celebrating the powerful characters, stories and creativity. The Patriarch was directed by James Marsh, whose credits include The Theory of Everything and Man on Wire, with Max Richter’s beautiful score On the nature of Daylight.

Endeavour returns on Sunday February 10 at 8 pm on ITV.
The next episodes are titled Apollo, Confection and Degüello.

8 thoughts on “Get ready for Endeavour VI”