As one ardent Cabin Pressure fan among a world-wide many, I had a notion last April that it might be quite a nice idea to show the writer (and ‘Arthur’ actor), John Finnemore, our appreciation by taking pictures of ‘travelling lemons’ in various locations and with various landmarks around the world. If you are thinking ‘why lemons?’ and ‘why travelling?’ then you really do need to listen to the show, you won’t be disappointed; if you’re thinking ‘you’re insane’ you’re quite correct, and I applaud you for your insight.

At first I had envisioned a small scale project with a few printed images and handwritten messages, but when over four hundred people responded to my initial blog post within just a few hours I realised it was going to be considerably bigger than anticipated. I’d expected perhaps fifty pictures, the amount sent in numbered in their thousands as people from towns and cities I hadn’t even known existed sent in their photos and messages. The final product was a 200 page citrus atlas and the best Geography lesson I’ve ever had.

It just so happened that the beginning of this project also coincided with the run of Uncle Vanya in Chichester, and so Roger Allam, the radio show’s first officer, graciously agreed to be a landmark with a lemon. When the 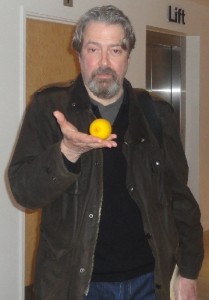 photo came to be taken, however, everything about him seemed to change. He had been patient, relaxed and seemingly amused by my shaky handed ineptitude, but now at once his expression, the set of his features, the way he held himself, everything shifted. Eyes hardening, he suddenly looked bored, derisive and slightly contemptuous at the frivolity of the situation. In short, this famously ‘nice’ man looked nothing like himself.

I was shocked and a little scared to see the shift- had I done something terribly wrong? When I looked at the photo to check it, however, I realised something quite extraordinary: I hadn’t taken a picture of him at all, but rather of Douglas Richardson. I had been startled before by how he had changed in a blink from the utterly inconsolable Vanya at the end of the play to the smiling and bowing actor, but though I’m always in awe of his performances, never had they struck me so starkly as in this split second switch into the persona of another- wholly recognisable as a character who generally exists as a voice without image- without a single word.

With the cumulative efforts of all involved, the results were quite incredible: an extremely happy John Finnemore and £15,000 raised for the charity of his choice (Médecins Sans Frontières).

If you would like a copy of the .pdf of the book for a small donation to the charity or to find out more, please feel free to contact us at lemonsandlandmarks@gmail.com.