Find out what the critics had to say about Roger Allam’s performance as Salter in A Number at the Bridge Theatre, London…

Polly Findlay brilliantly reimagines Caryl Churchill’s cloning play as a kitchen sink drama, powered by a phenomenal performance from Roger Allam. Allam’s Salter is a disarmingly gentle, somewhat broken man with a soft south east accent and a nondescript suburban-looking home. He seems genuinely remorseful at the way he’s lived his life, often unable to look the various permutations of his son in the eye. And yet: he lies and manipulates. I’ve seen Salter played as blustering and self-justifying, but it’s Allam’s much quieter turn that makes Findlay’s production. Now A Number seems – very obviously, in retrospect – to be a play about fatherhood: about the damage parents do to their children, and the irresponsibility in trying to run away from them. Allam’s Salter does not obviously seem like a monster (although there are hints later on that maybe he was). But he abandoned his son over and over again, in almost exquisitely cruel fashion, and A Number explores the terrible consequences. 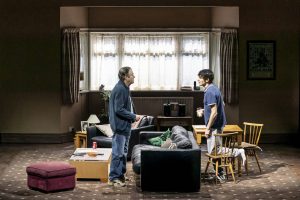 Roger Allam stars in a brief and beautiful investigation into identity… The father (Roger Allam), whose clothes hang off him with the fatigue of a lifetime of guilt and regret, eventually admits the unsettling family story behind the cloning process. He breaks extended periods of tense brooding with the humorous suggestion they sue the scientists.

The Independent – A Number, Bridge Theatre review: Roger Allam stars in a brief and beautiful investigation into identity, 21 February 2020

Allam maintains his softly spoken, avuncular manner even as he reveals his character’s selfishness and ambivalence, his cruelty.

Allam gives a diametrically opposite reading to Gambon – not at all imposing: hunched and hangdog, shuffling and sheepish, a man in off-the-peg clothes in a suburban milieu. There’s something smart about this; it’s as if Salter is giving a performance of humility through which poke sharp blades of threat and residual menace, like a version of a dad, not the real thing. 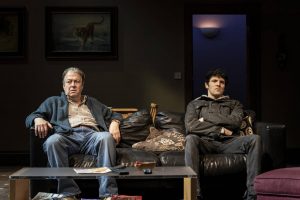 Fine performances… Allam’s rumpled testiness sits well with the character of Salter, who discovers that several illegal copies were made of his son. He’s upset, yes, but he can also see a large compensation claim coming… Allam lets Salter’s real nature leach out… Allam’s performance is a slow, seedy descent into moral horror…

Roger Allam and Colin Morgan give fine performances in Caryl Churchill’s nature-nurture debate…The production’s approach liberates the extraordinary, perturbing emotion of the play. By placing Roger Allam’s crumpled, battered father in this setting, his terrible, fallible ordinariness is revealed. Allam plays him brilliantly, as a slightly wheedling, bemused narcissist, whose belated realisation of the consequences of his actions dawns only slowly. “I wanted the same but different”, he explains, trying to justify why he replaced angry, difficult Bernard 1 with gentle, loving Bernard 2.

There’s another terrific double act at the Bridge Theatre, where Roger Allam and Colin Morgan play the father and son(s) at the heart of Caryl Churchill’s 60-minute masterpiece, A Number… Allam, in Polly Findlay’s production, also subtly shape-shifts, his manner conditioned by each son, by his memories and by his own growing guilt. 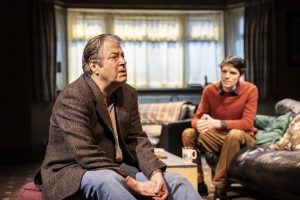 Father and son(s) are played by the same actors: Roger Allam and Colin Morgan here, both of them massively accomplished stage actors… Allam has the right shuffling embarrassment and uneasiness as he is confronted by each of his children… But though Allam and Morgan are unrelated in life, this father-son double act is a tense and wounding encounter.

A Number is no cold thought experiment, but a quiet rumination on human nature – our desire to be unique, for our lives to have meaning, for our imperfect minds and bodies to somehow achieve perfect ends. It’s warm and often funny – helped by Allam’s talent for awkward humour – but leaves you uncomfortable as you exit the theatre.

City AM – Caryl Churchill’s sci-fi drama asks what it means to be human, 27 February 2020

Roger Allam and Colin Morgan refashion Caryl Churchill’s contemporary classic (…) The five short scenes shift perspective with dizzying speed on a household alive with rancour and regret, and the ever-wonderful Allam, shoulders as often as not slumped, is at no point more arresting than when pacing the stage in silence in-between face-offs with one son or another: a man unable to come to peace who must piece together the scattered genetic shards that constitute his offspring. (The performance couldn’t be more different from the equally superb approach to the part proffered by its bearish, burly originator, Michael Gambon, at the Court.)

3 thoughts on “A Number: Reviews”

The new series Murder in Provence is available on BritBox UK, US and CA.

DI Thursday is back! Watch the new season of Endeavour at 8pm on ITV.

Production begins for the new series Murder in Provence, an adaption of ML Longworth’s crime novels.