Star-studded gala: 100 of Britain’s finest thespians come together on the 1st and 2nd of November to celebrate the theatre’s 50th anniversary

This once-in-a-lifetime event will bring back to stage scenes from iconic productions like Rosencrantz and Guildenstern Are Dead, The History Boys, Antony and Cleopatra and The Beaux’ Stratagemamongst others and will also screen rare footage from the archives.

As the programme is still for most parts under tight wraps, one can only speculate as to which role Mr. Allam will be revisiting. This writer’s money is on Willy Brandt, the charismatic German Chancellor he played in 2003’s Democracy.

Tickets are still available for the Special Preview Performance on the 1st of November at prices of £300 and £500 respectively. 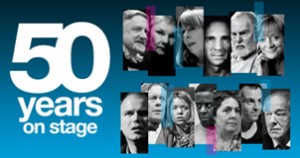 Those of us who don’t have a piggy bank to break into will have to comfort themselves with a chocolate bar and BBC Two’s broadcast on Saturday 2nd November from 9:00pm to 11:15pm. The two-hour show will also be broadcast live to selected cinemas worldwide.