Roger Allam is formidably upright and censorious as Javert.

This is not a company celebration like Nickleby, but an application of those values along with the musical experience gathered by the team on Cats and Starlight Express. To that extent the show is an important one, bridging gaps between musical and opera, and subjecting rock musicians to RSC tutelage while last year’s Clarence, Roger Allam, is unveiled in the role of Javert as an outstanding performer in the musical idiom. (…) The score also underpins such exciting production moments as the arrival of the barricade, the suicidal leap of Javert (done by the bridge flying up as Mr. Allam free falls on the spot) and the descent to the sewers with lots of dry ice and naked banks of light not equalled in impact since Mr. Hersey did something similar in Evita.

Colm Wilkinson sings well for the long-suffering Valjean, as does Roger Allam for his policeman enemy, who in the end is so confused by the ex-criminal’s obvious goodness he drowns himself.

This [mood-lightening gaiety], coming midway through the first act, is a vital moment because it is the first time you feel the real tang of individual personality on stage; and this is because Thenadier is richly embodied by Alun Armstrong with a face like Bardolph’s, all “bubukles and whelks.” Mr Armstrong, along with Roger Allam who lends Javert a haunted rectitude, is one of the two RSC regulars in the show, and it is conspicuous how they bring on stage with them an extra-textual depth mostly lacking in the cartoon-like characters.

And Roger Allam – rare among the cast of this RSC production in actually being a member of the RSC – brings glowering weight to Javert, eventually hurling himself into a splendid, Irvingesque suicide.

Les Misérables is everything the musical theatre ought to be doing, and within the inevitable limitations of its pageant there are some striking performances(…) But we also get some very strong RSC classical support from Roger Allam as Javert, plunging into the swollen Seine (…) 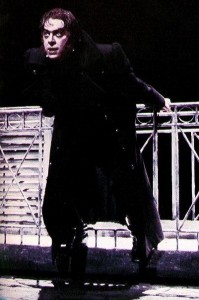 Colm Wilkinson and Roger Allam, representing mercy and law respectively, bring a steady and unpretentious power to their conflict, and Alun Armstrong is marvellously sly and toothless as Thénardier, the scavenging opportunist forever lurking on its fringes; but then the cast as a whole is surprisingly strong, considering many performers have been recruited from outside RSC ranks.

Javert, given an impressive, implacable presence by Roger Allam, faces the audience, jumps from the bridge into a rippling circle of shadows and, as the bridge rises, he sinks, drowning before our eyes.