Great credit too for Roger Allam (Michel) the businessman dealing in hardware, who has deposited his daughter’s hamster in the street and the ensuing fury that erupts from his act of cruelty is hilariously funny. 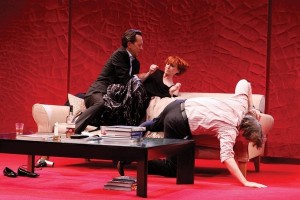 Both Roger Allam and Lia Williams, as Michel and Veronique Vallon, throw themselves into their parts with gusto leaving the audience as exhausted as they when the ugly words being hurled turn into physical violence.

The major problem is that Reza has too narrow a tonal range so things turn shrill and shouty too early on in the proceedings. She isn’t helped by the over broad performances elicited by three of the quartet – Allam is the exception – and it all become tiring fairly quickly.

One thought on “God of Carnage: Reviews”