It’s been almost a year since Zurich was recorded and finally the time has come when we can talk about the episode. In February, two of us were fortunate enough to be given production guest tickets. We were very privileged to be able to attend, but for those who weren’t as lucky we did a write up of the recording as a whole, which can be found here. It was reported that over 20,000 people applied for tickets, a real testament to the show’s popularity and the breadth of its influence. Painful as this prolonged silence might have been, it does seem an exceptionally apt time for the episode to be aired as Zurich is a real Christmas treat. 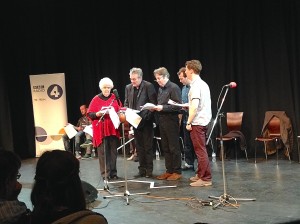 Though a long time Cabin Pressure fan, I will admit that the fourth and latest series was not my favourite. It seemed, perhaps, a little too ‘Disney;’ our erstwhile baked potato eating Cinderella, CAPTAIN Martin Crieff, came away from the episodes with one up on his moustachioed sibling, his dream job and a girlfriend who just happens to be a princess. Lucky him. Meanwhile, though there were also pleasing character developments for ‘airdot’ CEO Carolyn Knapp-Shappey and her ‘sparring partner’ Herc, personal favourites Douglas and Arthur did seem to fade into the background a touch by comparison. Indeed, the series finale went as far as to reduce Douglas to the status held by Martin himself in series one: a ‘supreme commander’ who is, in fact, neither principle (or, indeed, paramount) nor truly in command.

It was with some trepidation, therefore, that I sat down for the last letter of the alphabet, but I’m happy to say that it was mere moments before I was chastising myself lack of faith. In the world of comedy, there are few writers who can match John Finnemore’s talent for combining crisp, directional narrative with humour so potent that several moments had to be repeated during recordings because the audience was laughing too heartily. Above all, he created a cast of characters who have become familiar and beloved old friends for thousands- a real feat for a radio sitcom with relatively few episodes. Zurich was a showcase of all of these creative talents and more; from the early introduction of ‘Chekov’s brake pads’ to the moment the captain of ‘OJS’ was announced (to spontaneous applause) the audience was hooked. 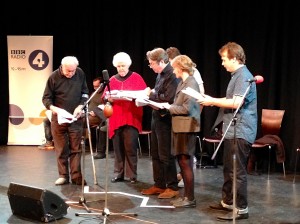 In addition to the first-rate writing, Cabin Pressure also benefits from a cast so starry it’s a wonder they’ve not been subject to a Brian Cox documentary. Finnemore himself plays ebullient Arthur Shappey with such gusto that it would be impossible to imagine anyone else in the role. It was extremely pleasing to see at least three payoffs in this episode for Arthur’s own particular brand of ‘Forrest Gump-esque’ logic, particularly given the adversary faced. The brilliant Timothy West plays Arthur’s Australian father, the not-so-brilliant Gordon, a character who despite very little actual air time and a pleasing absence of melodrama has become an intensely despised villain. The manner in which he gets his comeuppance is genuinely satisfying. 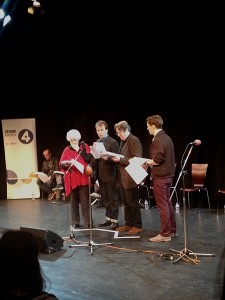 Stephanie Cole plays the long suffering owner and alpha dog of ‘My Jet Now Air’ with pathos as well as hilarity. So numerous and well-delivered are Carolyn’s quips that in less delicate hands than those of Cole and Finnemore she might come across as purely hardnosed, but these moments are beautifully balanced in this episode with evidence of her inner turmoil. Carolyn’s suggestion that she might fashion her plane ‘into a pleasing broach’ provides a particularly fine early example of Cole’s expert comic delivery of even simple lines, yet such off-hand witticisms are skilfully countered by the poignancy of the scene which follows. In her confessions to Anthony Head’s mellifluous Herc Shipwright, the audience are given a touching reminder of her humanity, as well as a pleasing affirmation of the strength of her relationship with her sheep-fearing suitor.

Benedict Cumberbatch- a name some of you might recognise from one or two trifling things- returns to the role of Martin, whose character has evolved to be far less prissy and insecure than he was when we were first introduced to him attempting to create a feline ice sculpture, though this development is still very much a work in progress. Aside from a rather dodgy Douglas impression which came off more akin to Jeremy Clarkson (though perhaps we could give him the benefit of the doubt and presume that Martin himself is just not all that good at mimicry…) Cumberbatch is in fine form here, his ‘panic buying’ in the auction scene a notable joy to listen to. Martin’s relationship with Matilda Ziegler’s Princess Theresa also adds an interesting extra dynamic to the show while managing not to detract attention away from the old guard. 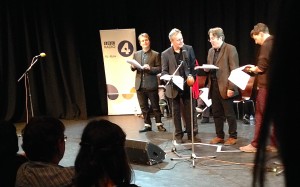 It is a great pleasure (and considerable relief) to see First Officer Douglas Richardson back in the swing of ‘doing something clever’ to make everything alright, and in the most spectacular fashion yet. Roger Allam, the absolute master of indignant italics, has a particularly interesting journey in this episode which more than makes up for his relative stasis in the last series. Having seemed to hit rock bottom in the job market, wary listeners might be forgiven for suspecting, just for a moment, that Douglas could well have sunk to conspiring with Gordon- however, they certainly needn’t have worried on that score. We are also furnished with some details of his past (and the intriguing ‘Rory’) but this just leaves me hungry for more: details about Rory and the Air England days, about Douglas’s ex-wives, his daughter(s), his background, anything!

Indeed, I’m singularly unwilling to say goodbye to Cabin Pressure as a whole, and I know I’m by no means the only one. That’s not to say that Zurich doesn’t provide a fitting and extremely emotionally satisfying ending: despite Martin earning his stripes as a paid pilot and leaving MJN Air, the widely held belief that the characters have become a family over the course of the show is confirmed by a change of company nomenclature, and ‘Our Jet Still’ flies on. What more could we ask for? Nevertheless, I readily envisage continuing to wish for a sequel until doomsday, because I don’t imagine there will ever be a radio series to surpass it.