How might a son feel to discover that he is only one of a number of identical copies? What happens when a father is confronted by the results of an outrageous genetic experiment?

A Number is a 2002 thrilling drama by Caryl Churchill which addresses the subject of human cloning and identity, especially nature versus nurture. The story, set in the near future, is structured around the conflict between a father (Salter, played by Roger Allam) and his sons (Bernard 1, Bernard 2, and Michael Black, all played by Colin Morgan) – two of whom are clones of the first one. 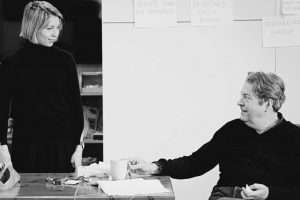 When A Number was first performed at performed at the Royal Court Jerwood Theatre Downstairs in 2002, cloning was a much debated issue, since Britain had legalized the cloning of human embryos for therapeutic purposes in 2001. While cloning for reproductive purposes remained illegal, Britain was the first country to legalise it for research. The play won the 2002 Evening Standard Award for Best Play. 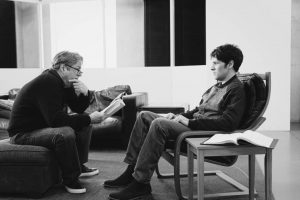 After Rutherford and Son at the National Theatre in 2019 and Limehouse at the Donmar Warehouse in 2017, Roger Allam joins once again director Polly Findlay. Another familiar face is Colin Morgan, with whom he previously acted in The Globe’s 2013 production of The Tempest. Designs are by Lizzie Clachan with lighting by Peter Mumford, sound by Carolyn Downing, and music by Marc Tritschler.

2 thoughts on “A Number at the Bridge Theatre”